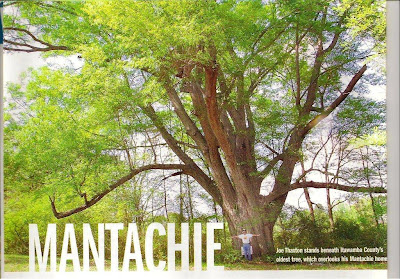 my grandparents live on a farm. in the family, the farm is mostly famous for the east field, which is rented out as an equine maternity ward so that the stretch from the house to the lake is a minefield of horse shit through which we always trample joking that i am the heiress of shitty lands.

but, on the west side of the house nearish to the barn and the gully that cuts around the south edge of the north lake through to the storm house, which is filled with discarded farm equipment and a century of leaves, there's also this big tree.

the farm is now kind of somewhat famous for this big tree.

i don't recall this tree from when my grandparents first bought the farm. but then they were moving an inconvenient distance from quality medical care all alone to the wilds of mississippi where the shack they were calling a house that sat on the land they had just purchased was arsened because the seller changed his mind (it's like martial law down there! my yankee father exclaimed, appalled). thus, they spent the winter living stuffed in a storage unit that was meant to be their garage. it was a situation so far from ideal that my grandfather immediately began displaying symptoms of congestive heart failure. all of that is why i did not stop to notice this tree then.

i do remember- in that vague way that one recalls things that meant nothing at the time but later become important- that at some point, a sign appeared by the big tree. it had a name now: The Big Oak. i also remember hearing stories. tales of people driving from miles around to see The Big Oak.

we all marveled that there were actually people who pilgrimage to trees. at the time, we laughed. we're not laughing so much now.

my grandfather recently went about certifying this tree. an overwrought bureaucratic process that seemed wholly unnecessary when we already knew the truth in our hearts- that this was the biggest tree anyone had ever seen. it was an unnecessary spectacle to have something that we cared about so little certified by the state.

but alas. now- thanks to a local government in which there is actually a department that oversees things like identifying the biggest tree under its jurisdiction- The Big Oak is officially the tallest, widest water oak in the state.

my grandfather was vindicated. his suspicions confirmed. he had the biggest tree. this was important for some reason and so, huzzah!

that is where the story should have ended.

but american competitive culture being what it is, mississippi has a forestry commission that runs a state-wide champion tree program. it is a subset of the National Register of Big Trees. the big tree has been declared a Misssissippi Champion Tree.

the memphis commercial appeal hailed this as a "towering achievement" for the state. i hoped that was ironic.

regardless, it has sparked controversy throughout mantachie, mississippi (pop. 1,107). suddenly big trees are everywhere. the mississippi forestry commission stirred the mess further by suggesting that everyone should "take a good look at the trees in their own back yard." the countryside could be crawling with champions!

this is serious business and, unfortunately, my grandmother bares the brunt of it. my grandfather overheard a mother telling a child at church service that she was no longer allowed to play with "that woman." then my gran got the stink-eye from a checkout girl at mantachie foods.

punish the women who can't control their men. that's southern justice at its finest.

but my grandparents are used to this. they've been down there over ten years by now and they know that in a town of 1,107 people, at any given time, there's a large percentage of them who wish you dead.

in the maelstrom, my grandfather is quite content. happy with the fact that his tree is officially the biggest, he naps peacefully in his la-z-boy.

my grandmother smiles, bemused, and says, well, he has his towering achievement. my mother takes my hand, whispering in my good ear, you know that's her way of saying everybody else can just go to hell.
by oline