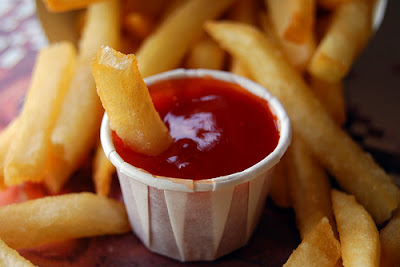 [via]
there's this irish restaurant in the loop.

(there are layers of hilarity here involving inconsistent curry, my canadian penpal, jmills, the philosopher, the cutting edge and poorly executed irish brogues, but i'm going to leave it at that for now.)

j.kan and i have arrived at a mutual understanding that we can never eat inside this restaurant. because outside, well, it's the loop and that is a lovely thing. inside, though, it is hella douchy. to an extent that whenever j.kan and i eat here and one of us goes to the restroom, we return to our table outside like claire danes in broke down palace- shell-shocked travelers on whom the fact is slowly dawning that we are in a land in which we have broken many rules.

sample inside dialogue: still, lauren, like, totally should have known there are things you do not say in meetings of the sierra club.

sample outside dialogue: but, no really, how do siamese twins have sex when they fall in love with the siamese twin who isn't directly opposite?

and, of course, on our table sits the bottle of The Ketchup that i have brought from home.

The Ketchup confuses the waitress to no end. she returns to our table twice to inquire whether we need anything, staring The Ketchup down as though doing so will force an explanation.

we leap at her with the zealotry of the recently born again.

she returns with a small plate of fries and two plastic ramekins, one filled with the restaurant's ketchup and the other filled with ours. we watch as she taste tests, pleased that this woman we do not know appreciates The Ketchup's importance enough to sample it with the solemnity usually reserved for an aged wine.

when the waitress leaves the table, having thoroughly investigated the label so she can buy a bottle on her way home, i begin tallying the believers on my fingers. at which point j.kan puts into words the sentiment that has both troubled and amused me these last few weeks: for someone who is churched on a weekly basis, it is impressive that you have converted more people to ketchup than to Christ.

true. but if heinz is the corporate sponsor of the afterlife, i'm bringing an army in.
by oline

Email ThisBlogThis!Share to TwitterShare to FacebookShare to Pinterest
filed under: The Ketchup Of Our Lives, the philosopher

Please please email the name of The Ketchup. I love that you bring it with you. I love ketchup. Convert me!

Nevermind. I scrolled down. Derr.

I like this story. The only thing that would have made it better is if you were being served by The Hairy Thespian.

i think you underestimate the implied threat of the hair thespian's presence. it's a specter that hangs over every meal.