i'm not going to lie. for the briefest of brief glimmers there, i thought i might actually fail canada. not as in let the country down, but just as in failing to do anything interesting while there and instead curling up in my hotel room in the hinterlands because i was tired and hadn't been sleeping tremendously well and the prospect of taking two buses, a train and a streetcar seemed prohibitively hellish.

buses and trains, i can do. streetcars? really, that's a bit much.

staying in would have been the easy way out. because- and this is an ugly admission coming up here- when left to my own devices, i would much much rather do nothing at all. especially when i'm by myself. even in exotic lands, i'd rather read in bed.

yes, i had paid money of my own (kind of sort of not really, but we won't get into that) to be in toronto for an extra day, but i have to say, it wasn't the prospect of wasting a hundred bucks that made me drag my ass out of the doubletree onto myriad forms of transit. no, no. i was the fact that if i returned from toronto with no pictures, everyone would know i'd done nothing but slob. and that was a mortification too great to bear.

ultimately, i did you people proud. i got up. i got out. i harangued a bus driver for directions of such precision that throughout the remainder of the 40-minute ride every 5 minutes he asked how i was doing.

and i made it downtown, where, fueled by surprisingly little caffeine (because fresh air is better), i wandered around for 5 hours. by myself. with no music or reading material.

me. a camera. a city. which is sometimes as it needs to be.

this past new year's, when i was throwing my troubles into that barbecue pit in west garfield, i decided one thing. this year, i was going to make a contentious effort to actually do the things i said i was going to do. because it's frightful how often people don't. how often i don't.

it might rain the next three days solid. that might've been your only chance. 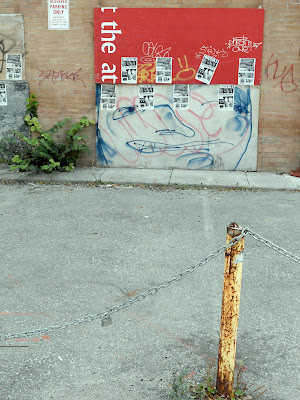