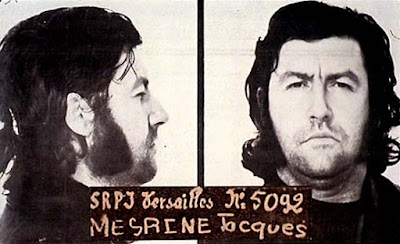 the other evening- because the joaquin phoenix documentary got such bad reviews that our months-long desire to see it was killed- dananator and i saw mesrine: killer instinct. and while i don't usually love seeing husbands shove guns down their wives throats or people being tortured in prison by means of having the lights shut off mere seconds after they have received a letter that is now rendered unreadable because it is dark, i kind of loved this movie. because there's something terribly elegant about french gangsters and there are certain tuesday nights where even girls just want to sit in the dark and see shit blow up.
by oline

Email ThisBlogThis!Share to TwitterShare to FacebookShare to Pinterest
filed under: oline at the movies, shit in the city

PS... that whole letter rendered unreadable bit has to go be the most brilliant way to torture somebody! ...if you can call torture "brilliant", that is.