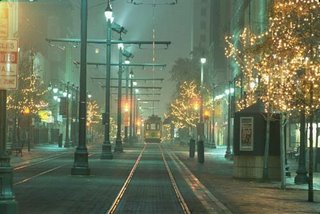 during maph, a girl in one of my editing groups got to bitching about the south. she used the term "backward." she was talking about alexandria, virginia.
i wanted to slap her and say, honey, you'd think mississippi was the third world, but the tall guy who never turned in his work quickly lept in to defend the charms of louisiana and the conversation turned elsewhere.

i can't begin to explain this city to people.
it's a politically incorrect, charismatic, strangely generous guy with a raunchy sense of humor and mismatched socks. you want to introduce him to your other friends, but you're pretty sure the minute he opened his mouth, they'd know he's bad news.
aristotle onassis, but without the business sense or the millions- just the barstools.
that's not an explanation though. it's just a string of faulty metaphors.

to me, memphis is the most restless of cities. there's a rhythm to the streets- as though the current of the river were shaking the bluffs and elvis was just humming along. while i've always loved this quality, it's like dating someone who's entirely too like you, so you just wind up driving each other mad.
memphis and i are too similar. we're too tightly wound. and that makes me want to run.