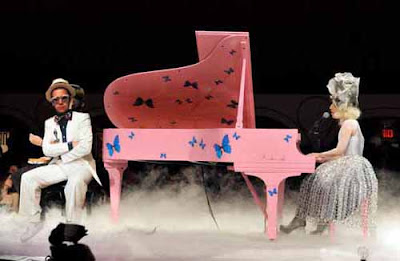 i came from a family with artistic aspirations. my grandmother made quilts. my father drew and wrote. my mother and her father sang. grandma ruth crocheted. my grandfather was a carpenter and restored musical instruments that no one in our family knew how to play.

they all fancied themselves photographers.

in light of this, my mum fervently adhered to a belief that children should be "dipped" (a phrase that always made me feel like a banana sliding into dark chocolate) into as many cultural pursuits as possible. because, though presumably most of them would be torture, one was bound to stick.

only the piano ever did.

and so, every year during the 14 years i took lessons, i had to endure three recitals. though i hated these events with the fire of a million suns, i only ever missed one- albeit through faked disease- and, therefore, participated in a grand total of 41 piano recitals in my life, a figure that does not include performances given in various nursing homes throughout the mid-south from 1991-93.

over the years i developed somewhat of a cult following on mrs. theresa's piano circuit. despite my obviously lax technical standards, i had a reputation for sticking complex classical pieces in performance. on more than one occasion the crowd had ooooohed and ahhhhhed.

and so in the eleventh grade, emboldened by my own acclaim, i chose to play franz liszt's "liebestraum" for mrs. theresa's annual spring recital, an event for which we were to have two pieces memorized. in hindsight, when mrs. theresa gave me an unprecedented dispensation from my second song, perhaps it should have been an indicator that i was aiming a wee bit too high.

but these were the days before i was a hardened hedonist. when i was the girl who would accomplish monumental feats not only on time but ahead of schedule. and so i persevered. i memorized that melodically simplistic, physically hellish song until i knew it backwards and forwards and, in just under two weeks, was doing the nightmarish fingerwork in my dreams. i practiced for so many hours that my father developed lyrics so he could sing along. (and thus the eaton family classic "i smell that smell" was born.)

i had never in my life known anything better than i knew that piece. i had never been more prepared for anything than i was for that recital. and come the recital, i played that song as i had never played it before.

until the g# in the second measure on the top of the third page.

because the g# in the second measure on the top of the third page is where everything went to shit.

where i forgot what i was doing.

where i stopped playing.

and i looked up, stared blindly into the audience and asked, where am i?

a simple question i've asked many times since, though never with quite the same terror nor the very great need to flee that i felt then. because it was then that i realized something my father had always warned i would not know until well into my 30s- i looked up and asked where i was and realized i did not know anything at all.