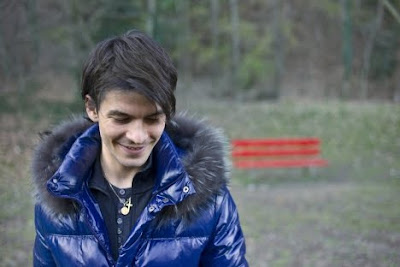 confession: i'm a little in love with stephane lambiel.

not in a serious way, like with james franco. more in that There Is Nothing Better In the World Than Men In Fruity Costumes Skating On Ice way that always sets in during winter olympic mania. (and yes, evan lysacek, you were a close second. if it's any consolation, in the future, whenever i see trent reznor i will remember you kneeling on that sheet of ice bawling your eyes out into your feathered wristlets.)

i am kind of in love with stephane lambiel because:

c) his costumes betray a fervent desire to join the musketeers.

i applaud all of these things.

and yet, there is something about stephane lambiel that is unsettling. something that is not quite right. after devoting a considerable portion of last night and, then again, this morning to reflecting upon the unique beauty of stephane lambiel, i have finally pinpointed his one flaw.

stephane lambiel is audrey tatou as a man. and that is probably a dealbreaker.

Email ThisBlogThis!Share to TwitterShare to FacebookShare to Pinterest
filed under: boys boys boys, the cutting edge