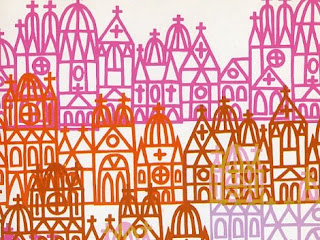 since the summer of 2003, when i realized i had been and she- a french major- had not, i have wanted to take my mum to paris. (by which i mean i have been willing to condescend and accompany her on a trip for which she will fully pay.)

if we're being honest, i have never truly believed that this is something we will actually do. it's on par with the plan croftie and i make whenever we go to macy's and walk amongst the nanette lepores. someday we will save our money and buy a $400 dress. yeah, no, we won't.

with most dreams, there is an implied resignation that they will not come true.

so when, while talking to my mum, i prefaced my handy dandy frenchy factoids with "this'll be really handy when we go to paris next fall," i never actually thought it would and with each passing fall, whatever possibility there was only dwindled.

thus, in the past 5 years, paris has served as little more than a muse for thematic gift-giving: a frohmer's guide to 2002 france, a phone book of parisian patisseries, a silver-plated metro map, a scroll depicting paris circa 1917.

who, you might ask, plots a trip with a scroll?

the answer would be no one. because this is a trip we only take in my head. it is pure fantasy. something we are never going to actually do.

despite the magnet emblazoned with the plaintive wail, TAKE ME TO PARIS!!!, i've always been fairly certain no one would.

then two months ago, everything changed. my mum called at 6:30 a.m. (when you only say the really, really important things, so i knew this was big) to say airfare to paris was surprisingly cheap and that we should go. significantly, not in the vague fall in the future we've been planning on all along but THIS fall.

since then, it has become a popularly accepted pseudo-fact in my family that my mum, my aunt, and i are going to paris the second weekend in october 2009.

my father has randomly alluded to it in discussions of the remodeling of the master bathroom. my grandmother has expressed horror that we would ever dream of crossing an ocean in these "troubled times." my mum has downloaded french lessons to her (eaton-speak) "tunepod." and my aunt has sought to foster-- however misguidedly through the unorthodox venues of texting and anti-obama emails-- a closeness we have not shared since the cold, cruel winter of 1995.

they all seem to be operating under the belief that, at long last, we are going.

which puts me in a distinctly heretical position because i do not believe a word of it. yes, after five years of implicit faith, i simply cannot begin to wrap my mind around the belief now.

nonetheless, i find myself lifted into a new gritty realm of parisian dreams. i'm hoarding vacation days, renewing my passport, scoping out 7-day metro passes and contemplating really, really important things, like whether my north carolina travels have so refined my packing skills that i'm up to the challenge of traveling internationally with an impossibly glamorous wardrobe without checking a bag.

alas, we'll never go. probably. at least i think not. but... maybe?

Email ThisBlogThis!Share to TwitterShare to FacebookShare to Pinterest
filed under: oh paris, oline out of the city, the family forward, the trip to paris that'll probably never happen but God-willing maybe will

If y'all end up going (and please go for a multitude of reasons), you must do a dinner cruise on Bateaux Parisienne. We did it last year and absolutely adored it. Great way to see the city all lit up.

oh the cruise is fabulous. parto and i did a version of that without the dinner when we went.

and yes, i will try try try.

and I can just HEAR them saying "tunepod"!! how are they always to gosh darn cute???

you totally have a crush on my parents, don't you? come on. fess up.

they may have a crush on me. help a girl move once, almost die of non-swine flu, and I become bffs.

not to mention the 3-year-long convo on insane asylum architecture in upstate new york. that'll get them every effing time.