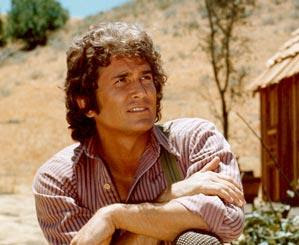 judging from the fact that it was repeated in every single obit, the most significant moment in the life of michael landon's son was that he and michael landon were about to make a made-for-tv-thingy together before michael landon's death at the age of 54 in 1991.

were i a decent person, this revelation would probably have forced me to dwell upon the unpleasant sadness of anyone's most significant life accomplishment being that they almost co-starred in something they ultimately did not.

but i am not a decent person. thus, my mind went straight here: to the fact that if michael landon was 54 when he died in 1991, that would make him 72 if he were alive today, the day after his son died at the age of 60.

which leads us to what in the hell was michael landon doing having sex when he was 12?

remember, this is michael landon we're talking about. bastion of family values. head of the little house on the prairie. tv dad to sarah gilbert ingles wilder.

this isn't just anybody. it's freaking michael landon.

in our discussion of Michael Landon, Pre-Teen Father, lindear suggested that perhaps this child was not, in fact, the fruit of michael landon's loins. perhaps he was adopted, an idea admittedly a bit more plausible than sex at 12 though still rendered somewhat absurd given the timeline with which we were working. what 12-year-old adopts an infant? what 30-year-old adopts a teenager?

fortunately, wikipedia (where one would inevitably wind up when trying to untangle the tawdry sex life of michael landon) yielded an answer.

so this kid, the kid who died yesterday, whose sole accomplishment in his entire life was having nearly starred in a made-for-tv-motion-picture with his father michael landon was, in reality, not the son of michael landon but rather the son of some other man who happened to have sex with a woman before she married michael landon. which, if i were a decent person, would probably make me more sad still as this only renders michael landon's son's claims to fame more tenuous, seeing as he is not michael landon's son.

but, in the end, i just feel terrible relief. relief that i do not have to live in a world where michael landon has let me down.

wikipedia, you magnificent bastard, you win again! (you always do).

and to be fair, I only read this blog post because I am the only heterosexual male who has read each and every Laura Ingalls Wilder book.

Laugh, and you get a single, lonely orange for X-mas.

so...um... when i have a little house on the prairie night, you're so going to be there?

If I hadn't already known this about you, I might be horrified. I hate LIW and her stupid oranges and whole chapters devoted to building outhouses. Blech.

I was young and impressionable and there were but scant few novels in my public school library. And at the time I thought reading meant serious hard work, which for a 5th grader is exactly what those books were.

and I would so be there if you only include cupcakes. I will do almost anything for cupcakes. Also, will there ever be another game night? I realize that is sort of a bad weatherish/winter night thing to do, but still.

oh yeah, i guess game night doesn't have to be something we only do when lindears come to town. maybe june? let's live through the mustache mayhem of gogol first.

or maybe a game night will BRING the lindears into town!

i didn't realize game night was such a draw.