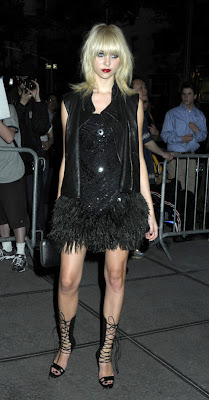 Is she wearing a Muppet?

What other movies/tv shows is she emulating?

In the face, she is kinda doing the whole drugged out Courtney Love thing. And she is trying to be a rock star now...

Plus, isn't she usually the one that is drunk?

all i've ever heard is about her mother scolding her over caloric drinks.

and we haven't even mentioned the (velveteen? plush? wildebeest?) vest...

oh if i could turn back time.

With rose tattoos on your butt...

well, if you are gonna get a rose tattoo, survey says: ass.

topped off with a hi-cut bathing suit and fishnets.

If I remember that video correctly, there was no bathing suit.

It was a fishnet body stocking and a leather jacket...

i thought there was something covering the lady bits. something that has made me always associate black swimsuits with cher.

I wouldn't necessarily call it a bathing suit even though Wikipedia does. It looks more like the Borat bathing suit.

so did cher pioneer the borat bathing costume?

Oh God... Is Cher to blame for Borat?

oh, the soundtrack of steven's coming out...

seriously, it feels like that whole era of my life was just one big album-long music video.

Our relationship was/is sponsored by Madonna "The Immaculate Collection"

Our Song came up on eF's ipod this weekend and i heaved a little "ah, meggie" sign.

shit. "i saw the sign" will now be in my head for the remainder of the day.

Ooh Ace of base!!! I actually just got rid of the CD about a year ago when I was cleaning out my old CD collection.

you had that on cd?! i only had the cassingle. i was so behind the times.

I had the entire CD. I loved them. There were 3 or 4 songs off that CD I had.

Ooh, Aqua (Barbie Girl) is coming out with a new CD too. LOL.

Now if I can only have the NSYNC reunion of my dreams...

who is barbie girl? the voice of barbie from barbie and the rockers???

No, that crazy annoying song from probably junior year... I'm a Barbie Girl in a Barbie world. Life's fantastic when you're in plastic. You can fix my hair, undress me anywhere..."

dude, i don't remember that at all. of course, junior year was during my rebecca st. james period so i was still several months away from discovering Real Music.

and speaking of S- did you hear natalie d. is knocked up?

Poor baby about to brought into this world.

I just don't know what happened to her. We literally grew up together from day 1. She used to be sweet.

and then she dated steven (oh, snap!)

I feel that life would be rather unfantastic is we were plastic. all the squeaking and being so light that wind pushes you around. And we'd be even more bad for the environment than we already are. Also, not really alive.

i'm trying to think of a snazzy way to bring that back around to poor little j here, but i can't.

Are you saying that Steven turns women into bitches?

I would argue with that because you aren't a bitch. And there are other girls in our grade that turned into bitches and never dated Steven...

So, is it correlation or causation?

ok, ok. maybe she just sang the "i'm proud of you" song so much she turned against herself.

I think she was on drugs...