2 elizabeth taylor has not yet died 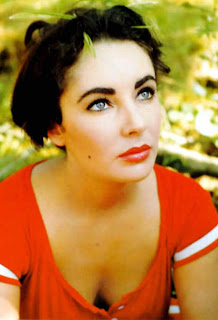 but, because elizabeth arden has started exploring
bereavement ad prices, i think we are at liberty to reflect

so let's talk about elizabeth taylor-hilton-wilding-todd-fisher-burton-burton-warner-fortensky.

most of us probably first met liz taylor in all those white diamonds and purple pendants and red emeralds and black pearls commercials from the 80s. you know them. they still crawl out of the elizabeth arden vault and crop up on tv every christmas.

you almost forget about her and then suddenly, there she is every december. svelte, gorgeous, sporting that leonine hair all famous women seem to cultivate the minute they hit 52.

there's a jarring disconnect between the elderly dame that's been wheeled out publicly every now and again for the past decade and this ageless liz living in a cabana overlooking the aegean and hawking sensual perfumes.

but then, this is what happens when people outlive their image. it's as though they're already gone.

my first prolonged introduction to liz taylor was a 1995 docudrama starring the dynamic thespian sherilyn fenn. clearly it was a definitive experience as i promptly committed all of her last names to heart.

[fyi- this was during an era when memorization seemed terribly important. upon reading how jackie recited tennyson to jfk, i mistakenly believed true love would hinge upon my ability to perform dramatic recitations of the soliloquy in "are you lonesome tonight" and select passages from "the midnight ride of paul revere."

ps. it is impossible to exaggerate how sexy the phrase "middlesex farm" sounds to naive seventh grade girls.]

i didn't begin to appreciate liz taylor until i was older. hell, i would argue the world isn't really old enough to fully appreciate her now. having first appeared in 1941, she's one of those figures who- in an industry where many die young- seems to be stretched thin across far too many decades. much like churchill after WWII, she has outlived her use. we do not know what to do with her.

her filmography is comme ci, comme ca, a grab bag of stunning embarrassments littered with a handful of brilliantine gems.

the first liz taylor movie i ever saw was raintree county, which is essentially a gone with the wind knock-off wherein scarlett o'hara finds a doll in the yard, determines mammy is her mother, goes crazy because she can't cope with being the love child of a slave, and burns down tara... or something to that effect.

it's a stirring mess to behold on its own. never mind the underlying real life drama of liz taylor acting alongside montgomery clift, who is quite possibly the love of her life and is gay and will never love her as she needs to be loved and has just survived a horrifying, disfiguring automobile accident in the aftermath of which she knelt by his side in the road and held a severed chunk of his face onto his head.

i didn't know this when i was twelve. back then, it was all about the pretty lady in the pretty dresses. and this is a part of why i shout from the high heavens that biography is the end all, be all. because in fiction, we must settle for the story we are given. in real life, there is always more than we will ever know.

that pretty lady in pretty dresses? that bitch was tough.

nowadays, i would peg her as the most sexually threatening woman of the twentieth century. at which point everyone in the room would probably scream, BUT MARILYN!!!!!!

but marilyn, no. dear people, you are comparing darkness to light. marilyn cared what the world thought of her. liz honestly didn't give a damn.

liz lived. she lived large. and, despite having contracted every physical ailment ever known to man and experiencing more brushes with death than dante, she has lived for an indecently long time.

she was always a working woman, whether she had a husband or not. her reasons were not always noble- usually she just needed the cash. but even after mike todd died, there she was, back on the butterfield 8 set. back in front of the camera. back to work.

which is pretty admirable for someone who was largely known for her breasts, her drug problems, her marriages and one cataclysmic international affair.

liz taylor is an acquired taste. like jell-o shots or sushi or madras pants, she is scary. she is shrill. whether she is young liz, old liz, thin liz, big liz, burton liz, hippie liz, warner liz, or 80s liz, she can be hard to watch. (put on the flintstones movie and you'll see what i mean.)

the problem with liz taylor is that she delivered more memorable performances in life than on film. or at least, watching her, that's what we can't help but think.

i have to admit it has become the goal of my writing life to (a) be featured in Oral Reading and/or (b) elicit a potluck metaphor. these are sure signs of success.