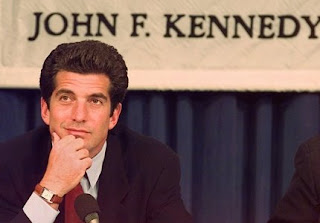 #1: had he lived, jfk jr. could conceivably be president by now.

this probably means nothing to anyone but me and i'm not even sure what it means to me, except a nagging fear that it means i am in some way racist for preferring the presidency of a dead white man to that of a living black man. and, of course, some fists of frustration in the general direction of c. david "my subject has been dead for 10 years and, due to an appalling lack of fresh material, i'll devote a HUGE chunk of my overpriced jfk jr biography to fruitless musings on what might have been" heymann's home.

let's just clear the air and admit that in that my heart, deep deep down, i am a monarchist.

it's a matter of organization. democracy is so messy, what with campaigns and conventions and such. if it were streamlined, if there were a clearly delineated line of succession, if we could see who and what was coming down the road, the country would run so much more smoothly. there would be a master plan. and i love me a master plan.

yes, every now and again we might be ruled by a prick and spend his/her entire lifetime thinking, dear God, don't let him/her destroy us, but for the most part i think it would work out quite pleasantly. the english seem to have got along rather well.

but then i'm also a socialist and a southerner and a democrat and a christian, so my belief system's been pretty fucked up from the start.

but back to the dead white man vs. the living black man thing for a moment.

i'm not racist. of that i'm quite sure. i heart barack as much as the next person and i think it's great we've elected a man who transcends race and whom a majority of white people can accept without reeling in horror over his arabesque middle name.

and i would be a liar not to admit that i do harbor some doubts that anyone who would ignore the fact that they have that very day had a cast removed from an injury incurred through an inability to keep an airborne object airborne in order to fly a piper saratoga through blinding fog could possibly be qualified to run the country. there are many many ways in which that was exceedingly dumb.

because- as my grandmother always says when trying to find some qualification for someone who is about to do something they are thoroughly unqualified to do- he came from good family. he was a kennedy. and, as the song goes, kennedys can.

Email ThisBlogThis!Share to TwitterShare to FacebookShare to Pinterest
filed under: kennedyland, pancakes and politics, teddys

Of course, our previous president also came from a "good family" and was as close to a monarch as we've ever gotten, in terms of being 1.) anti-democratic and 2.) son of a previous ruler. In other words, monarchs don't always have that Kennedy shine. For every Elizabeth I and Ramses II you get a thousand Neros.

Personally, I wouldn't wish monarchy on anyone. If the poor bastards stuck with crowns in My Employer are any indication, being a royal is a sad, lonely existence in a golden cage.

the previous administration demonstrates the importance of starting with the right clan and having a good overthow every now and again.