my inbox is liberal. 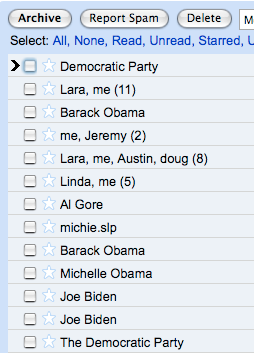 i need coffee. i was wondering for a second why you were talking with lara, austin, and dog.

and I can only imagine what your gmail advertisements are saying!

it's a tough week for dog. i keep typing him as gordo.

I'm glad to add to the liberalness of your inbox. See you tonight for the party/riot!

dougo. minus the u and plus an r.

i have no idea.

maybe this gordo character was the one who likened upstate Indiana to the swamps of Louisiana.

ready to Barack Bottom it tonight?

I freely admit that sounds much dirtier than i ever intended it to.

um... whoa. i know we've all known each other for 5 years (hey, isn't it sensei's birthday again??! should we celebrate that tonight??? or is this us celebrating sensei's last year birthday and we'll celebrate this year in 2012?) and whatnot, but i am not ready to barack bottom. that is way too serious. i would need a wedding ring before i'd do that.