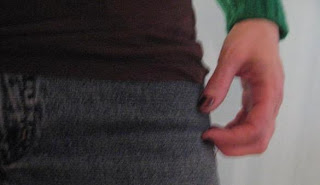 today, due to unprecedented thriftiness and a steadfast determination to wait out a demin defecit until the post-christmas sales, i am wearing jeans from 2001.

let's dwell on that a moment.

9/11 had happened the month before. the ipod, the xbox and windows xp were released the month after. britney spears and jTim were dating. dakota fanning was 7.

we were at war with no one when i bought these jeans.

so on the one hand, these jeans make me feel outrageously old. but then, they also raise the question: do i seriously still have the body of a 20-year-old?!
by oline

wow, jmills. you must have said something really ugly there to go and delete it!

Were these tapered leg or bootcut?

and actually it was the tapered leg that did me wrong all those years. the tapered is the most devious of legs.

yes, but how old is your soul?

no, it was a double post. I didn't think it would come up like that. It looks so sinister.

i cannot judge... I put a safety pin in my shirt to keep it less "low necked" and thought it was subtle.

You notice she didn't actually answer whether or not these were tapered or bootcut...

that dragon boob shirt was an inspiration to us all, lindear. do not be ashamed.