5 are we too sexy for our shirts? 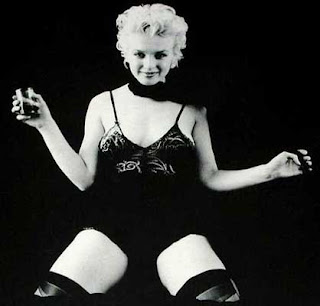 we're in the midst of a burlesque craze around here.

i know. you're all reeling in horror, fluttering and fanning yourselves, thinking, gasp! how can the oline we all said in high school would read books during sex be burlesquing?!?! shocking! scandalous! swoon!

my mum had pretty much the same initial reaction and ever since has prefaced every discussion of my tuesday evening activities with the line, dripping with the same dread and concern exhibited by the mothers of strippers the world over, you know, cupcake, this is a fun diversion but it's not something nice young ladies pursue... professionally... as though show were something i could apply for. like a secretarial job or the peace corps.

it's more like the national honor society. by invite only.

so we're burlesquing. croftie and i (albeit i'm way back in kindergarten while she's wielding props and robes). with michelle l'amour, whose ass goes pow.

this'll sound très self-involved (a self-involvement i'm clearly aiming to leaven with the insertion of gratuitous french from my vast frenchy vocabulary of vingt et un), but burlesque has taught me many, many things about myself. great sprawling ideological discoveries that can be condensed to a pithy list of trois.

un (aaaaaaaaaand... i'm done), i cannot shimmy. i can shake my ass. i can convulse my shoulders. i can point my boobs here and there like wonder woman in a bullet-shooting bra. and i can pseudo-shimmy for about 3.2 seconds before i think, OH MY GOD, I'M SO CLOSE TO SHIMMYING!, completely lose my concentration and go back to shaking my shoulders and looking like a pre-orgasmic skeleton hung from the rafters, suspended on strings.

this is not attractive.

so now, because vivian velvet says the shimmy is hard and practice makes perfect, i shimmy at home. the vieve is discreet. she won't be gossiping to her sewing circle (or eF) about how her crazy oline has suddenly taken to slinking about the house, shoulders spasming, arms flailing about with all the grace and elegance of an epileptic ethel mertz.

which brings us to my next self-involved point. the amazing power of context (second only to the scary power of hair). i'm 27. i've spent a decade doing yoga, eating my vegetables, believing cupcakes a necessity, and frowning at women who look like lollipops. i finally feel comfortable in my own skin. and then i face michelle l'amour's mirrors.

michelle l'amour's mirrors are mean bitches. because, as croftie and i have both discovered, when surrounded by voluptuous women in boob tops, we are skin and bones. in front of michelle l'amour's (elongating? trick? funhouse? devil?) mirrors, i am all leggings and lace. a pasty white slip of a ghost. lara flynn boyle after two and a half cheeseburgers.

maybe it's the dance clothes. maybe if we wore dresses with beads and fringe, we'd have more curves. more to work with. more to shake. my classmates twigged onto this early. they trotted out their rhinestone necklaces and red patent heels weeks ago. i didn't make my first hesitant move towards urchin-hooker chic until last night. a move that climaxed with a strut down several highly trafficked chicago streets in ripped leggings, a green ass-clinging tank top, a plaid button-down from the sear's boys department, and boots.

this is depaul undergrad fashion at its apex and, because i am a judgmental elitist, it is an outfit i have made fun of many a time. but such hypocrisy seems negligible after burlesque. maybe it's just the flashdance glamor of having danced! [insert jazz hands here], but in the afterglow, my judgie-wudgie qualms re: slubbing downtown in lindsay lohan's best are entirely erased.

i said i was leading up to something but, really, i'm not. all i've got is these three things. and from them, collectively, one would think we would be able to glean a fundamental, earth-shattering truth, but i haven't been able to glean anything except maybe that one should not judge- which seems like it should have been evident enough before.

but that is what i am left with. that one should not judge. because in the harshness of michelle l'amour's mirrors, we're all just an ill-clad, skin and bones, shimmying mess. which, maybe- just maybe- is kinda fucking sexy.
by oline

Email ThisBlogThis!Share to TwitterShare to FacebookShare to Pinterest
filed under: sluts in the city, so you think you can't dance

I hate to break it to you but Vieve hasn't been as discreet as you wish to believe. Us Crofts have had the inside scoop through our own fabulously gay gossip queen, Barry. Somehow he and Vieve have devised some sort of communication network, perhaps they use the internet whilst we sleep. would explain the paw prints all over the white desk the computer sits upon. If there is anyone who wouldn't look like a stick figure skin and bones in one of the ass that goes pow's mirrors, it's gay barry.

Michelle L'Amour continues to find her way into every last social circle I have here in Chicago. First my friend becomes part of her troupe, then I get dragged (yes, dragged!) to show after show after show of women taking their clothes off, then Michelle shows up at various parties I'm attending, and now I find you and the Croft are in her clutches. Everywhere I go, everywhere I turn, no matter how far I run, somewhere in the distance I can always hear the faint echo of an ass going pow.

Not that I'm complaining, mind you...

if i may say, despite the mirrors, i find your body to be absolutely perfect. i mean, damn.

wait wait wait a minute. Austin, you run in the same social circles as the ass that goes pow? So, will she be coming over to the next HIMYM viewing night?