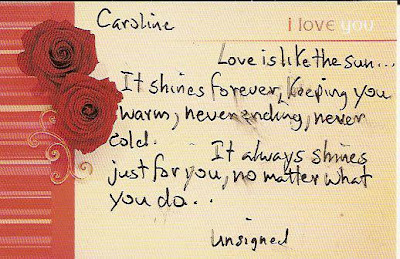 Email ThisBlogThis!Share to TwitterShare to FacebookShare to Pinterest
filed under: creeps in the city, the office

not sure trauma is the right word for this. but then again, my soul as been blackened, i rarely feel anything less than a genocide...

you obviously felt that very strongly.

Where were these flowers and note left? Work? Home?

work. which makes it even creepier.

What you need to do is hire a group of junior detectives to find a handwriting match and solve the mystery. Look at those K's probably easy to differentiate those...

You could tape the love note and a new note of your own prominently on your desk. Your new note should say, "Love should leave a more kempt note next time."

That's not asking for trouble at all.

when you described it over the phone, i was anticipating it to be printed, as though to disguise the fact that someone actually thought this out and could easily blame some hallmarkian company for coming up with such cheese. but, wowzer!! i can now why you might be a tad freaked out. and the fact that it actually says "unsigned"... creepy creepy. but, then again, it's no mass genocide.

haha- i just noticed that it says "she said"- that's funny

she says, he says.

and seriously, who signs something "unsigned"? a creepy admirer sending bear-straddled bouquets is one thing, but is it too much to ask that they have proper word choice as well?

please tell me you're planning on a sequel pic to this post, with one displaying the deadness of the bouquet.

your wish is granted...