0 rebel with a cause 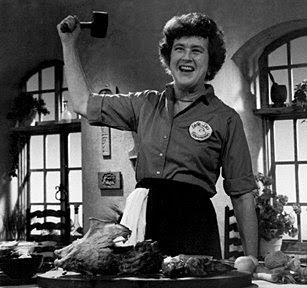 i don't think the word rebel would ever pop into anyone's head when they think about me. sarcastic, brightly dressed, irreverent, and giggly, yes. but not rebel. because i'm not really rebellious. i had a slight problem talking too much in mrs. woody's calculus class and continue to have a bit of a lead foot, but otherwise i follow the rules.

except when it comes to recipes. i cannot follow a recipe.

i leave out oil and eggs. i throw in extra milk. i substitute confectioners sugar for salt. i make chicken and rice without the chicken. i use catalina dressing instead of western because it's fat free and they're both red then toss in hot sauce to make up the difference. i halve and third them- as though i actually have a working grasp of fractions of cups and fluid ounces.

i don't know where this comes from. this culinary anarchy. maybe from my mum, who was substituting apple sauce for oil decades before that became socially acceptable. or maybe from my gran, who prefaces every meal with, "well, i almost got all the ingredients in."

my father is the complete opposite. his water comes to a rolling boil before he tosses in noodles that are cooked the full 15 minutes (mine are barely submersed before their extraction). he can't make anything without all the ingredients (i seldom let half of them in). he sees recipes as the end all. i see them as a jumping off point.

for whatever reason, i've done this since i was a kid baking cakes with nothing but mixes and milk and it seems to have only worsened since i became an "adult" living alone with access to an oven. expect a fully-ingrediented dessert and who knows what you'll wind up with but throw me on a desert island with a betty crocker box and a cow, and i'll make you some magic.
by oline