i am the kid who screamed at santa. the little girl in yellow striped tights who fled wailing from minnie mouse at the hickory ridge mall disney show. the pigtailed five-year-old whose mother had to bribe chuck e. cheese to stay away from her birthday party. so maybe it isn't surprising that even if it were my patriotic duty, even if the american people had loyally cast their votes and elected me to be their president and consequently the leader of the free world, there's no way in hell i would be hugging that thing. 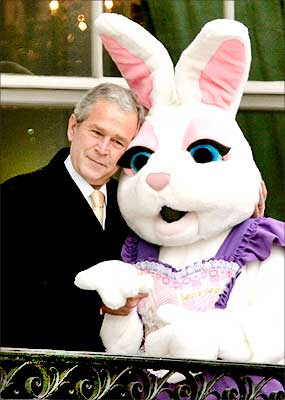 Which one? The one on the right or the left?

What's sad is that both should be banned.

i never knew ol' w was a furry. look at how he is holding onto that poor thing, caressing it ever so lovingly. i think it's the hand on the back of the head that really gets me.

also, it kinda looks like a stepford wife, all dolled up in the apron and fully equipped with that blank, submissive stare.

then inexplicably the gloomy chicago clouds parted and a voice from internet heaven said, oline, your offerings of late have been tedious. i hereby wipe them from the face of the blogger earth and they shall be no more.

W and Easter Bunny used their nasty tricks to stay on top!

that's her apron. so she doesn't get egg dye on her fur. bunnies have to worry about these things.