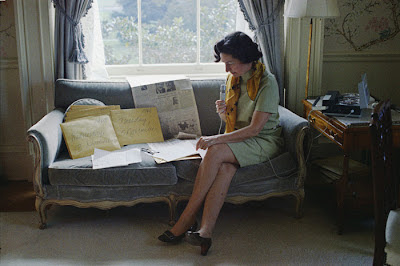 lady bird johnson died the other day. and i'm quite sure most of america's response was: she was still alive??? and it's hard to imagine that she really was. she and LBJ seem so long ago. so far away from when we were even born.

first ladies are important, people. i've had this argument time and again when some fool has gone off on a "what did jackie ever do?" tangent. i refuse to fold.

it has to be quite possibly the hardest thing in the world to be "the wife of..." of anyone- let alone a president. clearly, the entire status of a first lady derives from being "the wife of..." but there's more to it than that. i'm pretty sure it's a damn tough job.

let's imagine being married to LBJ. a man most known for two things: 1) being incapable of cleaning up JFK's mess in vietnam, and 2) showing his apendectomy scar to a roomful of reporters. privately, he was a bit of an ass. an aggressive politico, a brilliant legislator, an unfaithful husband, and an extremely insecure, proud man whose primary negotiating tactic was to bring someone into the bathroom and ask them incriminating questions while they were pissing. classy.

and let's imagine being the followup act to jackie kennedy. fun times there.

so lady bird had a bit of a rough ride, as they all probably do. and yet, despite the rather demeaning nickname, she was tough stuff. she had her own money. she owned her own radio station. she was the main proponent of the highway beautification act and she won the congressional medal of honor. bravo.

and there she was the other day, passing into history with little more than a 15 second obit on CNN. which is both sobering and terribly inadequate.

i wrote lady bird johnson once. after jackie's death, in that summer of 1994 when i was manically, unconsciously gathering information for the something i was going to do ten years down the road. liz carpenter, her press secretary of a bazillion years, wrote back. an ivory sheet of paper curiously scented of lilacs and that smell that paper gets when it sits out in the sun. it answered all my questions with only the occasional smudge of typewriter ink.

i like to think that the pair of them, little old ladies in their eighties by then, sat out in their lawn chairs amidst a field of wildflowers answering correspondence all day long under the texas sun. leaving the pages atop the buds waiting for the ink to dry.
by oline

Email ThisBlogThis!Share to TwitterShare to FacebookShare to Pinterest
filed under: kennedyland, retro

(and LBJ was unfaithful? it astounds me how little I know about history.. especially the recent things, like, from 1900-present)

and how cute is your old ladies image? Aw.

i think they were pretty much all unfaithful. but his was mostly pre-white house. obviously nothing remotely close to JFK.

I'm so naive. They were ALL unfaithful?

well. i've never heard a bad word about gerald ford. but pretty much everyone else has received a lot of bad words.

carter- no, though he had the playboy interview scandal where he said he lusted in his heart, which was apparently super scandalous coming from a sunday school teacher in the 70s. reagan, i don't know. hasn't it been established that he was on the road to dementia? i don't know about the extracurricular exploits of the demented.

he was on the road to dementia while he was still president? Caro, will you be my history teacher?

that was the word on the street.

yes, yes, i will. but you must remember my knowledge is limited to women married to men who were president and people/objects/animals/etc in any way affiliated with jackie kennedy. i in no way bring The Big Picture.

Reagan was already showing signs of dementia while he held office. But you see that a lot with dementia. For some it can be a really mild form for years and then it will just quickly accelerate.

Eisenhower was unfaithful with his jeep driver during WWII.

hold it. back up- his jeep driver was a woman, right?

Yeah. Duh. He was an egotistical bastard--not gay.

duh your own self!