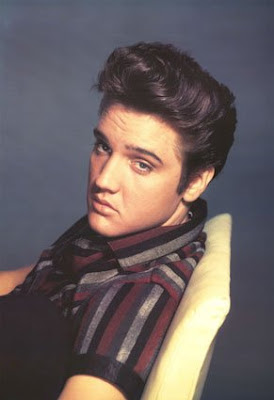 today, elvis- wherever he may be hiding- turned 72.
everyone is expected to put on their HUGE sunglasses & have a jelly donut.
for the king.
by oline

elvis is clearly in a parallel dimension fighting nazis with the power of love, as a werewolf.

no, no. he's chilling on noah's ark with JFK, hoffa, marilyn and amelia earhart.

a) how come you didn't run with my blatant michael j fox-ian line of narrative logisitics?

c) are each of the 'dead' celebs in charge of different animals? different classes of animals (reptiles, etc.)?

b) most historians agree that noah is dead and, therefore, most likely not on his ark. however, his ark is still at-large.

c) i envision noah's ark to be much like spaceball 1. so, amelia would be piloting while elvis would be sitting atop a throne conveniently located to the bakery. hoffa would be paving the hallways, marilyn would be the swimming instructor, and JFK would be the resident man-whore.

though i don't know where Elvis at the moment, i do know of a certain player piano that is no doubt playing "love me tender" at this very moment.

followed by a selection from the Celine Dion American Songbook.

caupcake?
sorry.
i was too overcome with rock'n'roll to type.

oh the Celine Dion American Songbook. what a hard selection to pick from.

because i'm down to canned goods and miscellaneous puddings, the official oline birth day revelries were limited to a peanut butter banana- albeit unfried and unsandwiched. a decidedly half-assed celebration. somebody better've gone whole hog and had a jelly donut.

i had a boston creme cupcake last night. does that count for something? and i know... boston creme. i am so predictable. you'll also be happy to know that i did not kill the oven, afterall.

boston cream pie is right up there with fritos and reese's peanut butter cups as things i could eat endlessly if i were trying to commit suicide through sugar/salt shock.

way to not kill other people's ovens. that wouldn't have been very friendly.

I wonder if I grow my hair long enough, could go to a stylist, and say do it like the Elvis in this picture. Matter of fact my hair is almost this long. Oh man! I'm excited! It's either CT's from the Real World's hair or Elvis.