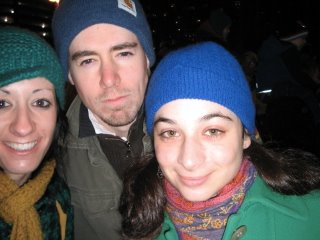 "if they were to bomb this place right now,
all of chicago would be dead."
-random dude, who very accurately summed up the lighting parade

"it just didn't feel right trampling all those people."
-random lady, who very accurately summed up leaving the lighting parade

this picture very much makes it look as though the dread pirate would have been the mastermind of the bombing. methinks a flaming star would have been an integral component in the death of all chicago. but they probably cost $4 by now, and that's rather pricey.

flaming glow-y stars are for romance, Oline, not destruction. were you not there in front of the walgreens? that dude bought his girl a flaming glow-y star and she was totally like "c'mere, you!" and the snogging promptly commenced.

this photo captures quite a bit. Croftie's drug habit, our fondness for hats and various shades of the color green. What it doesn't convey is the sheer tonage of humanity behind and about us. Who wouldn't need a flaming glow-y star?

there was another photograph that captured the pirate's "i've just eaten an entire lemon" face and the oline's "i am close kin to the british royal family" look, as well as a much more graphic rendering of croftie's drug habit. this photo seemed the lesser of two evils.

somehow neither captured the sheer tonage of humanity. here it looks like we're a good 100 feet from two people. perhaps it was all in our heads.

Would you reply to my email already!!!! This is driving me NUTS.

Am I the weird one here that doesn't think Croftie looks like she's on drugs???

clearly, "i'd" is a reference to croftie's little known full name: i'drene velma croft. i'drene, bless 'er heart, walked the 800 miles from the Historical Landmark Trailer Park in CT to make it on her own in the big scary city, albeit gaining a bit of a drug problem in the process. but just so's ya'll know, folks, i'drene makes the best gosh darn brownies this side'a the missippi rivuh. yes, sir-e-bob. that'd be why we all almost always look lak we's on drugs.

(forgive me, friends. one must prepare to thanksgiving in mississippi.)

i think it's all in the eyes here. crofie's say, "oooooooohhh yeah." and doug's say "crowds make me angry."

Caro, you *have* to read what Kristina left as a picture comment on one of the new pics. It literally cracked me up this morning.

And I make a mean brownie too. Just nothing "special" in them.