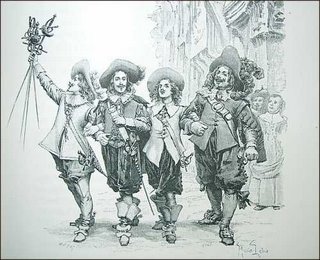 the perks of being a girl (slips! skirts! stilettos! oh my!) are really too great to ever resent not being a guy. but if i were a guy- probably because i read entirely too many dumas novels at entirely too young an age- i would want to be a swashbuckler. because swashbuckling seems the best of both worlds. fancy weaponry? yes. frilly, bejewelled clothing? yes. violent, heroic death? yes. perfumes? yes. and it just sounds like the funnest guy thing to be (despite the fact that my feminine sensibilities are rather disgusted by the "swash" bit).

i do realize that swashbuckling is not all schemes and swagger and sabers. it's very 17th century paris- and that's a century and a paris where baths were infrequent and the wearing of all things velvetine was bound to result in some unpleasantry. but if i were a swashbuckling fella, i could deal.

of the three musketeers- of which there were actually four- i would probably be aramis. if we're basing that on the disney film (the one that made chris o'donnell the offical dreamboat of 1993), that would make me charlie sheen. a mysterious, spiritual, sensual charlie sheen as opposed to a drugged-out, sex-addicted, 9/11-conspiracy-touting charlie sheen. in the 1998 dicaprio version, i would be played by jeremy irons, which is a bit more respectable.

but, i do have to wonder, is there a swashbuckler in all of us? secretly. deep down. particularly the men. do you occasionally, in private with the curtains drawn, don frilly blouses and brandish imaginary weapons while doing the dishes? sometimes i wear the red lace bombshell dress and rhinestones while vacuuming. because sometimes, as a girl, you just need to be audrey hepburn being sabrina fairchild. et tu, lads?
by oline

Thoughts of Errol Flynn in The Sea Hawk come to mind. Not so much as a musketeer but a pirate. Both wear blouses and are clad in boots. I think that I am more of a Tarzan or John Wayne man now.

i hate to shiver your timbers... but alas, no frills buried in my closet, either. however... during college for a play called School for Scandal i was able to don a powdered wig, leggings, and frilly shirt. i have to admit it didn't do it for me. what did do it was covering my face in faux dirt, sporting a ten gallon and spurs for a play called Wild Oats. to borrow clark's john wayne bit, i guess i'd be a saloon-sauce swillin', spittoon spattin' jesse james type. awesome.

further proof then that i would probably be a gay man. if i were a man. which i'm not. so that would make me a gay manly girl. i guess. eh.

this reminds me, oddly, of my gay friend charlie. met me for lunch one day wearing a shirt that reads, "homosexuals are gay" - i could not stop laughing.

The thing is most boys want to be cowboys. The thing is that swashbucklers are always a hero, cowboys sometimes are not. They are just a man. A tough, whiskey drinking, gun shooting man who has a code of honor regarding women and life. Anyways I'd be a Zatoichi before I was a swashbuckler anyway. Have a good day.

Please be my down-the-street neighbor-oline again. I need your kind of people to be hanging around me, telling me about their deviant vaccuuming behavior.

I agree. Fate should've at least given us a good four years of college together. Oh wait.

See? That's what's so infuriating! Fate DID give us four years at college. Fate just should've made you bring a tabloid to Shakespeare, and then Fate should've sped up my now ardent love for tabloids (I keep buying Star and Us Weekly, and it's all your fault), and then maybe we could've forged the bond of life and time.

Oh well. We'll always have Memoirs of a Geisha .