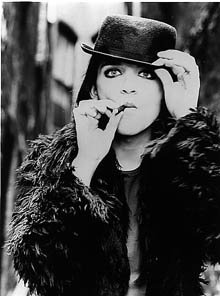 placebo is one of my greatest guilty pleasures. they're huge in europe and teeny in america (aside from a substantial following of velvet goldmine obsessives and people who have dated me and been exposed). a pleasure because no one can rock the role of whiney voiced male lead quite like the beglittered, beautiful mr. molko. guilty because they've put out five albums with about one awesome album's worth of songs. thus, the ratio of awesome to dud is upsettingly high.

since the fall of 1999, i've been desperate to see them live. since then, i've missed seeing them live no less than ten times. in the spring of 2001, they were in new orleans with idlewild two days after i moved to memphis. in the fall of 2003, they were in chicago the week before i moved to town. most infuriatingly, during the summer of 2003, they swept through europe, hitting london, paris, rome, florence, innsbruck, venice, koln, and amsterdam exactly 24 hours ahead of partner and i, leaving in their wake a trail of promo posters. in venice, in frustration, i thieved one off the wall of a church. the irony in that somewhat lessened the annoyance.

but then, finally, at very long last, things fall into place: placebo and oline in chicago at the riv, november 3rd. oh the eyeliner!
by oline

I'd like to go on the record that I liked Placebo before I started dating you. When Sleeping with Ghosts came out I started to love them. Just sayin'. haha

so i said that they could have had one really awesome album (and without you i'm nothing comes closest) but then had this realization that perhaps they're just doing the same awesome song over and over ("pure morning" being the most obvious exception). "every me every you," "the bitter end," "because i want you"- they're each the kick-ass track that's the highlight of an uneven album. and they were each released first so there was that moment of hurrah! they've finally done the awesome album! and the subsequent let down of boo. they almost finally did it but didn't. as someone who is on the record as having liked placebo before dating me, your thoughts?

Placebo is always the biggest tease. They show so much promise but lack initiative. But the good thing about them in concert is they have the time to play all the best songs. It's not like that one little song on the album that you absolutely adore and they never play it because it is not a hit. At least they have that going for them. I have had many Placebo converts in my time. Sleeping with Ghosts generally does it for them. Most of the time I just give them a "best of"
I hope the show is amazing and I am so sorry we had to miss the 2001 one. To think that Al got to go to that one. I want it to be just like you imagined.

that would be MUCH more mortifying, but i'm game!

honey, you know you're there. can we elbow our way through the 15 year olds and be in the front row? of course, from that vantage there will be no denying the fact that molko is a midget and i would like to deny that as long as may be. whatever shall we wear?! fortunately, there are two months in which to formulate answers to these vital questions.

I think Placebo covering "Where is my mind" is the culmination of you when I first met you. At least for riding a car with you. Throw in some heavy rotation of "Ultraviolet" and there you have it.

I used the word "you" a lot in that one.

you make it sound as if the 'maroon hair' was some sort of mythical animal to be hunted, the 'white stag' or something. Sally forth men! We are out to recapture the maroon Hare!" *trumpet fanfare*

suddenly i'm having monthy python-esque visions of a maroon-coloured rabbit with fangs hanging from the neck of a noble knight who says "ni!"

Caro... Fall of 2000 had maroon hair?? Oh darn. That was my blonde and red streaks period. Fall of 2001ish had my Crayola red hair. Remind me to send you pics of the new hair color!

meggie (there's so much chatter here seems like i must acknowledge that this is not, in fact, a reponse to fanged rabbits who go "ni!"- and thank you, men, for skipping avian allegories altogether. the oline appreciates!), forget you didn't see me for a ridiculously stupid long time. maroon was when lindear and i decided to dye together and found hair color in the tget clearance aisle. (lesson learned: when hair color is under $2- put it down and step away.) very very bad. the haircolor of hardcore, gothic lesbians with intense eye-makeup. at the time, we were wearing retainers, homemade t-shirts, and plaid pajamas. so it didn't quite coalesce with our overall look. show me the color!!!

I think that I may actually have a pic of you with the Maroon hair. You had so much school spirit then. Of course I can't harsh your gig because you remember the hair experiments that I did. None having anything to do with dye but outrageous nonetheless

dude, you totally harshed my gig. [and am sure it's not painfully obvious that- because i'm not of-the-streets-oline- i have no idea what that means.]

It's a Pauly Shore reference. You should be proud of yourself for not knowing that. Bye the way, when it is on the intarweb it is spelled "d00d". My friend Pittman saw a pic of me when we had our first ghetto party and he was like "d00d, you totally look like gutter trash!"

it's frightening how easily jack black's body could have been pauly shore's place. their names continually cropped up in the category of strange attractiveness. thank heaven's we got in the jack black boat and stayed away from pauly's shore.

At least neither of them are Carrot Top. He scares me at how huge he is now.

to harken back to my ER comment... people still watch Carrot Top?

how dare you utter that name in the general vicinity of my ethernet non-presence! I shall have to impose a self-boycott of Olineinthecity for a period of as long as I can muster to show my displeasure at such blatant name-dropping for he-who-will-not-be-named.