4 "is your friend a neo-futurist?" 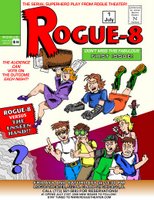 at 11 on saturday night, the dread pirate, croftie and i went to see the bombshell's fabulous, totally noticeable turn as unnoticeable girl at the rogue theatre. i won't even go into the ordeal of staying up past 9 p.m., because that is embarrassing. but suffice it to say we three were a wee bit eh when setting off on our journey.

and the thing about our journey was we didn't know much about it. the bombshell had sent an email with a bombshelly set of directions that i neglected to read and simply forwarded to croftie, who remembered key tidbits. so croftie knew the theater was either south or north of foster street, i knew the play started at 11 and was 40 minutes long, and we all knew the bombshell was in it.

we did not know that foster was an endless bus ride away, what street the theater was actually on, the name of the theatre or the name of the play. not knowing all of this, we approached the first thing resembling a gathering of theatre-goers to inquire if this was, in fact, a line for a forty minute play beginning at 11.

brave croftie strode up to a couple at line's end and for a glorious moment we thought this was the bombshell's theater, but these people were waiting for a series of 30 plays in sixty minutes. we were about to doubt one of the three things we definatively knew when an unfortunately unclean fellow asked, in a decidedly haugty tone: "is your friend a neo-futurist?"

we were confused. bombsy was kind of raised catholic but we think she would have told us if there'd been dabbling elsewhere. obviously, this was not our forty minute play. we walked on.

thanks to hans and franz, we eventually found the "baby theatre," conveniently located by the "baby gym." we had caffeine and laughed and cheered and voted for bombsy (or tried to) and made promises to be back for the next episode.

then, because it was a night where nothing could go quite normal, we had a ghetto train ride, arriving at fullerton just in time to see a frat boy bitch out his friends and wander around the station bleeding profusely from the head. almost enough to make you want to be a neo-futurist. because a neo-futurist would be impervious to such things, transfixed by a riveting internal debate of capital “F” F/futures versus small “f” futures.
by oline

You missed some of the best action at the Fullerton stop, Escapoline. Shortly after you left we were approached by an emormous Frat-boy 10 feet high (okay, so he wasn't that tall, but at least a full head taller than me, and as broad as cadillac) who was hiding from the scrum toward the end of the platform. He asked how we were doing, apologized for his rambunctious friends, showed off a freakish amount of pale shaven chest, misquoted Murphy's Law, and told us, among other things, that he wouldn't have anything to do with the plight of injured comrade despite the fact that he was a physician in training. Here's looking out for one's boys I guess.

Dude, I TOTALLY told you the name of the thetare and that it was on Clark...I hallucinate alot of emials, but surely that wasn't one of 'em!

bombsy! dude?! i TOTALLY didn't read the directions, so by the time croftie was trying to reconstruct them and explain them to us- we were without much of anything, which is obviously our own fault.

and dread pirate- you and croftie missed the shenanigans of profusely bleeding from the head guy, who left a trail of blood down the stairs and was wandering the street trying to contain said blood with his hands and shouting to his rather frazzled, plaid shirted companion, "dude! i think i'm bleeding! that's blood, right? dude! do you see that?"

you are the awesomest friends ever to come cheer your b'shell on.