my two biggest vices are a massive diet coke addiction and a fondness for sugared breakfast cereals. since somewhere near an embarrassing $15 a week goes to sustaining the DC habit, i try to keep the sugary cereals business in check by settling for whatever is on sale. thus, breakfast veers wildly from bran flakes to fruity pebbles to quaker oats toasted oatmeal squares to cocoa puffs. when captain crunch and lucky charms hit below the $3.99 mark, it's like winning the lottery.

this week, lucky charms were a magical $3.89. this is the ceral that was only ever on very exciting rare occasions available at my grandmother's house. with 12 vitamins and minerals, whole grain and calcium (not to mention MARSHMALLOWS!), it's an overload of delight.

in memphis, i lived in close proximity to a target and was able to enjoy off-brand sugary cereals galore on the cheap. the only discernable difference was that the charms had a harder life. they were deformed masses of colored marshmallow. these were not the lucky charms.

so i'm accustomed to the occasional randomly shaped charms. nonetheless, i was completely mystified when i peered into my cereal bowl this morning and found this: 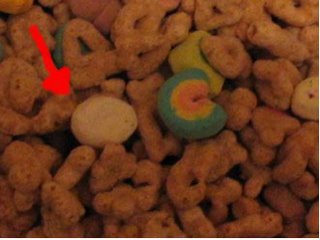 i thought: oh. it's an ostrich egg. no. a white balloon. no. a cloud. oh please not curdled milk. no. someone's discarded flavor-crystal filled gum. no. ummm. what the hell is that?! and how on earth does it fit into the well-established lucky charms narrative?!

my friends, that is a sparkling magic mirror marshmallow. it will help Lucky (the lucky charms leprechaun, in case you're out of the know) see the future and avoid dangers along the way in his enchanted forest adventure.

according to the box artwork, the mirror marshmallows are splattered with "sparkling magic" a la pollack. but it was apparently a lazy day at General Mills when my box was birthed because there's a shocking shortage of sparkling magic. clearly the person in charge of this gimick didn't quite think things through. for an opaque circle with sprinkle sparkles does not a mirror make.

and what of poor Lucky, on his enchanted forest adventure? marshamallow, marshmallow on the wall, i can't see anything at all.
by oline

OKAY!!!!
My friend Michelle bought some meringue cookies. I only bring this up because they taste like the Lucky Charms marshmallows. They are slightly larger than a golf ball. They are quite amazing. When I was a child I would eat all the cereal part first and save the marshmallows for last. Now with these cookies it is as if I am indulging myself the entire time.

Darling, we don't want anything mirrored in our cereal. That's bad and fatal.
But my vote is on the white balloon.