8 in which oline tries to rationalize and exorcise the IBF 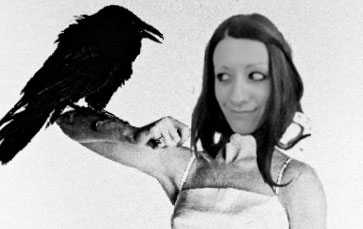 the time has come for a bit of an explanation.

i hate birds. they are rats with wings. they make me want to cuss.

as far as i can tell, this fear developed when partner and i were in venice. the venitian pidgeons are uncommonly bold and thought nothing of swooping upon us in such a horde that we literally stood in st. mark's square clutching one another. since then, the birds and i have been at extreme odds.

lately, their reign of terror has reached new heights of ridiculousness. north carolina seemed so tranquil. it was only upon returning to chicago that i realized it was because there had been no harrassment from the bird population.

in trying to rationalize the irrational bird fear to people, i've concocted a decent, appropriately irrational, hypothesis. while i will in no way attest to its veracity, it seems mildly plausible. so here's oline's own Irrational Bird Fear (IBF) Theory:

1. eyes are really gross. yeah they're great when you're wild about someone and stare deep into the mirror of their soul. but the minute anything goes remotely wrong they're totally disgusting. with a single stray eyelash, a beautiful eye becomes an inflamed mess, the rubbing of which produces an obscenely gross squishing noise that partner used to torment me with in pre-cal. i wear contacts so am resigned to being up close and personal with my own eyes, but the grossness lingers and an eighth grade shop class warning that you always have to stay awake during the surgery for eye injuries remains seared into my brain.

2. at some point i picked up the aforementioned hatred/fear of birds. this is obviously psychologically linked to the inherent grossness of eyes. for, i ask you, what is a bird but a spastic, flying eye poking out instrument walking on wormy feet and dressed in pretty feathers?

3. i wear huge sunglasses all the time. up until now this habit served three purposes: the hugeness protected my delicate complexion from being brutalized by the sun. the lenses protected my unruly contacts from rebelling. and, obviously, the glasses themselves were a jackie/audrey homage. but now i can't help but see them as some unconscious effort to keep the birds out. my personal anti-eye poking device.

but then, maybe my IBF isn't so irrational. they do, after all, make signs. and if they make it a sign, it's gotta have some validity. 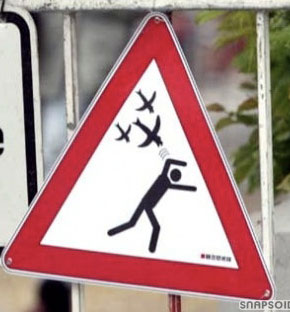 Email ThisBlogThis!Share to TwitterShare to FacebookShare to Pinterest
filed under: freaking birds, the natural condition

I am with you on that one. You know the story. My mom used to tell me that birds would think that doodad was a worm and try to eat it. My brother then subsequently threw me outside and laughed as I ran in fear with my hands covering my business. The Mississippi Gulf Coast is overrun with gulls.
I am more concerned now with the hygeine aspects of birds. A bird defecating on me would have to be one of the most humbling moments in my life. Thankfully, it hasn't happened yet. It did happen to my friend Milton in elementary school and everybody made fun of him. He then went on a crusade of killing them.
Sadly, I still care for the pests. If I see one injured, I might tear up. I mean I even feel bad for injured bats. My friend Joey Larsen shot a bird with a BB gun when I was 8. I cried and took the bird and put neosporin on it and put a band-aid on it so it could heal. It died and I bawled. I have revealed too much. You might have already known. I have forgotten what I may have told you.

Now while I agree that eyes are gross (my eyes have been abused by contacts for so long I could wear lens made of sand-paper and be no worse for wear) and the prospect of something poking my eye is a fear of sorts (it runs in the family... my father would forgo novacaine when having dental surgery because he would not allow needles anywhere near his face, let alone his eyes) and i suppose birds by their plucky acrobatics and agile body structure may possess an above average ability to enter the realm around ones eyes I see no reason why they should be singled out here. What about gusting pine needles? Levitating porcupines? um, very tall people dancing around wearing Madonna bras? Unruly antlered beasts of burden? Rogue champaigne corks? You see, there are lots of potential eye gougers out there and do levitating porcupines have the cutness of a baby chicks? Do Madonna bras possess the playful snarkiness of a pirate's parrot? Are gusting pine bows likely to dance about a bird-bath wiggling their fluffy downy bellies with glee? Birdies are great they just need better PR. And now with this bird flu business I swear somebody must have had their datsun shat upon one to many times and has called a holy war upon the delightful avian society. But I shall have their wondrously feather-crested backs!

I knew other people's butt warmth on a newly vacant seat upset you, but I didn't know that eye squishy noise does too. My Cupcake, the Eccentric!

to the clark bar- vividly remember that story. that story is horrifying. maybe that story laid the groundwork for my IBF.

to the dougo- am glad the birds have such a staunch defender. but gusting pine cones? levitating porcupines? madonna bras?! why on earth would you want to add to the phobias, much less add even more thoroughly irrational ones? now knowing their blinding powers, i will tread with glee upon the pine cones of the world.

to the bombshell- you see why grey gardens was so scary?! i used to have an incredible fear of death by electrical shock. but i've made leaps and bounds with that one. leaps and bounds.

I find it amusing that, in the process of defending the airborne species from Oh!-'Lighn's flights of fear and fury, our own Toe-Sock has made a fatal Freudian slip by extolling not the "cuteness" of a baby chick, but the baby chick's deadly "cutness."

way to keep your eyes peeled croftie! (alas, yet another grotesque phrase that reenforces the idea of optical grotesqueries)

I've seen a baby chick cut through an entire tree without any force behind it. Scary.