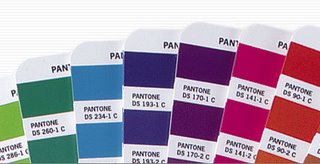 i've been a user of hair coloring off and on since high school. and that's been about the most daring thing i've done. no piercings, no tatoos, no smoking, etc, etc. but i am, to an extent, a hair chameleon. (though in the interest of full disclosure even that isn't quite as rebellious as it sounds since it's always of the "28 shampoos" variety and a safety shade has been identified in case things go awry and i wind up green a' la anne.)

as the Decade of Bad Hair (1991-2001) drew to a close, hair dye provided a pleasant reprieve. i was red at senior prom, orange at graduation, mulberry sophomore year of college (the bargain bin is a harsh mistress, my friends. never trust her when it comes to hair colorant). it's why, since the hellaciousness of a particular production experience last year, nearly every deadline after has been commemorated with a new shade of dark brownness.

way back when, there was a summer of a lot of placebo and velvet goldmine and black nail polish and glamness. and i so wanted to dye my hair black, but i didn't. because it would make my mum- who is of the opinion that nice ladies don't color their hair, much less color it unnatural colors- frown. and she would have seen me on a regularish basis at the time so i would have been frowned at regularly and that's no fun. well, today i went- because i got in a mood and the market had only three shades, one blonde, one my safety and then- "midnight noir." it turned out interestingly- part marilyn manson, part monica geller. and really all i ask is to be interesting.

my mum doesn't know about "midnight noir," so the frowning has yet to begin. but i'm impetutous when the "i need hair of a different color" impulse strikes. and while i have sense enough to go for the black instead of the blonde, other things don't get fully thought through. so it wasn't until after a ha ha over having followed the hair path of britney spears that i remembered my mum is coming to town. in a mere 19 shampoos. echoing the moral that would have been drawn from the life of belle watling had craig brewer made gone with the wind: it's hard out here for a dyed haired woman.
by oline

Oh how I remember the mulberry. I could never dye my hair. I am scared of it coming out red and staying red. My hair has a natural propensity towards red. I think that It is just waiting for me to strip it down so it can make its dramatic comeback. I couldn't dye my hair anyway, I shower too much now.
19 shampoos huh? Surely, you can go be active, something that requires you to shower afterwards to bump up the number of shampoos. At least it's not a mohawk. My mother almost had a heart attack. My grandmother loves it though. Good luck ChameleOline.

that is seriously the most fascinating word i've seen in months!!!

it sounds like a hoity toity chenille. or an undergarment. or a perfume. or a genetically engineered melon. or a floor cleaner. or a brutal mispelling of chamomile. it's kind of beautiful in the way of those unpronounceable european words that have entirely too many vowels.

and the mulberry was bad. very very very very bad. the hair color of lesbians. and while there's nothing wrong with that, it's very NOT oline.

I will leave the exact definition of the word up to you. That is one of the joys of having your degree. You pretty much get to assign meaning to the English language. Think of yourself as the Feynman of the English speak world.