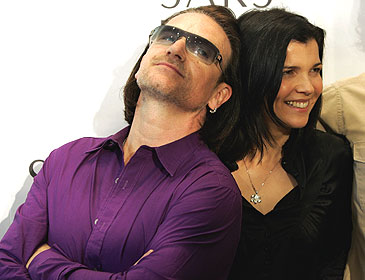 three things. i LOVE u2 (you know me, you know this). i write. so i occasionally write random fluff for a u2 newsite.

as a result, i'm now assigned to interview and profile the u2 cover band that bombsy and i saw at navy pier last month. and from this has sprung bombsy's diabolic scheme: that i must date faux bono.

we know nothing about faux bono, excepting that he likes u2 enough to be faux bono and that he looks creepily young. he could be in community college. he could be a communist. he could be celtic. we have no idea.

bombsy, of course, has run away with it, musing on where our first date will be (a pub, obviously). what i should wear to their next show (hair definately down, that red shirt that stopped traffic, the black lace skirt, and oh yeah, the HUGE white sunglasses). at what point in the show i should approach him about the interview (during the break in between sets, so he'll be aware that you're a creature of mystery for the remainder). and how we should introduce him into our friend group (friend group, meet faux bono).

a brown-eyed girl with dark hair and diaphanous skirts, i'm to be perceived as a potential faux ali. because a faux bono would need a faux ali. then we could become decoys for the real bono and the real ali, shadowing them around the globe and making very public, paparazzi distracting departures in bullet-proof SUVs. apparently being faux ali would have an entire lifestyle attached to it, a kind of tom clancy lifestyle at that.

and being faux ali would be an adventure. as bombsy said from high atop her throne in subway, leaning over a ham and turkey on white: "sometimes you have to be faux ali on the way to being real oline." i tore another piece off my turkey on wheat and smiled and said hmmmm...
by oline

Cupcake, look...it's not easy for me, having this kind of *vision*. But you're going to have to trust me on this.

like rose said to jack before they went "flying": i trust you.