2 a ray of glorious light in Hell Week (part deux) 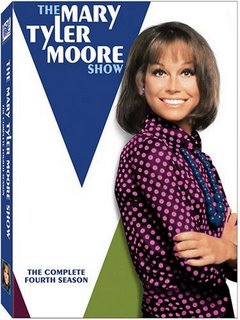 a history lesson, if you will.

in the fall of 2002, the first season of the mary tyler moore show- the greatest sitcom of all time- was released on dvd. the packaging contained an announcement that the 2nd season would be released in march 2003. this was a vicious lie.

a naive trustoline, i promptly began recording over the dozens of tapes that contained the treasured episodes i'd been watching religiously since ninth grade. the episodes that along with the BBC pride and prejudice comprise the very core of my olineness.

34 months passed. inanities like "welcome back kotter," "the jeffersons," "all in the family," "m*a*s*h," and "gilligan's island" were released in their entirety. still, there was no more mtm.

finally, in september 2005, season 2 came out. season 3 followed in january and season 4 hits streets today. this has somewhat restored my deeply shaken faith in humanity.

three seasons remain. it is my dearest wish to live to see them. Fox, hear our prayers.
by oline

You always were a taper. I remember when you used to tape my dragonball z's for me. You were such a dear. Now they sit in my trunk waiting to be watched again. I tried to watch them again like 2 years ago and I thought "oh man this is terrible. How did I ever love this?" If only I had known about Bit Torrent back then. You could have saved you a great deal of hassle. The sentiment is still appreciated though.

trustoline sounds like some automotive product used lenghten the life of your car's engine by making its sundry parts more at ease with their inanimate selves. Not to deflect sympathy away from your long awaited mtm DVDs. As long as there is still something called Olineness in the world Fox won't have to stand up against the wall just yet, tho maybe they should anyway.