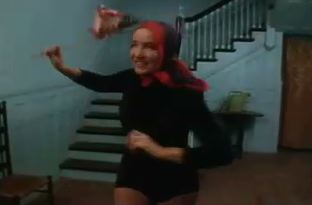 I: the pink fan
lindear got married last summer and because there was some bridal party drama, i surprised her with a bag of happys, one of which was a pink feathered "my pretty princess" fan. because there are very few excuses in life after the age of ten for purchasing such things, i got two. lindear's was incorporated into newlywed foreplay. mine sat on a bookshelf collecting dust. with the move, it relocated to a kitchen hook because it was pretty and matched the mixing bowls.

IV: the meeting of the thrain
invariably, the end result is me, usually with implausible hair and in a revolutionary outfit, standing on tiptoe in a smoke-filled room beneath a screeching fire detector waving a pink feathered fan wildly about in the air to the cocophany of zucchini snapping, crackling, and popping on the stove.

Email ThisBlogThis!Share to TwitterShare to FacebookShare to Pinterest
filed under: everything always inevitably comes back to grey gardens, lindear, silly things

Proving yet again that you are indeed a Bombshell....cooking involves a pink feathery fan and a triggered fire alarm.