0 some day we will talk about something else

on tuesday, i went to the dentist. it was the first time something i didn't want went into my mouth since his dick.

i warned my therapist of my fear last week. i said, my fear is once we get going this is going to be like one of those magicians with the handkerchiefs, on and on pulling them out of their sleeves.

to lay there and take it.

i seriously do not know how i will ever go to the gynecologist again.

what are you feeling in your body? my therapist asks.

i wonder if my numbness frustrates her.

in the moment, after the x-rays and before the arrival of the dentist, i noted the adrenaline was in my torso so that i could tell her later.

hey, look, i felt something in my body!!! like a cat laying a dead mouse at its owner's feet.

this is a thread i do not want to pull. it feels like some sort of rape/assault hide-and-go-seek.

our metaphor was driving around the neighborhood and pulling the car into the driveway of the house of the abusive relationship from college.

i don't know what the metaphor is that describes how it is that i am actually going about this.

there are black spots. there are a lot of things i do not remember.

i'll allow the possibility does exist that some of it was wanted, some of it wasn't coercive, but then again, it seems like you can only be told you're a cocktease so many times before you're totally worn down and all of your decision-making is taken away from you and you have no choices left.

looking back, there were no choices. only grad school.

grad school got me out.

i want so very very hard for it not to count. my brain works overtime for ways to make it not count. because he wanted it so it can't be unwanted, right? even if i wouldn't have done it had i any choices left.

i do not blame them.

debo reads my essay and expresses her guilt and i tell her NO. NO. we are not to blame here. in therapy, i say i do not blame myself, i do not feel guilt, but as i tell her this, i'm aware i'm extending to her a generosity unavailable to myself.

but this man abused our daughter, debo says and i am distraught for debo's daughter.

how dreadful for this to have happened to debo's daughter.

that it has happened to me feels less severe.

but stick it in the constellation of family relationships and i'm all like, omg, debo's daughter has been harmed!!!

there's the time in the lower bunk of the nephew's bed.

the time in his mother's shower.

the time on the back stairs at my parents house.

there are all the times i bled.

there's the way in which he took over my whole life so that i would go to the gym for three hours a day and, junior year of college, claimed wednesday nights as my alone night where i wouldn't be expected to shave my legs or see him.

this puts that picture from your graduation in a whole new light, debo says.

and i'm not sure whether it does or if this is something we're imposing upon it.

i was angry at him, undoubtedly, for showing up to my graduation, uninvited. i was dating donovan (albeit secretly, because we both feared that, if this man knew, he would beat him up). i did not want this man there. i didn't want him talking to me or my family.

there are actually two pictures. in one, i look fine. 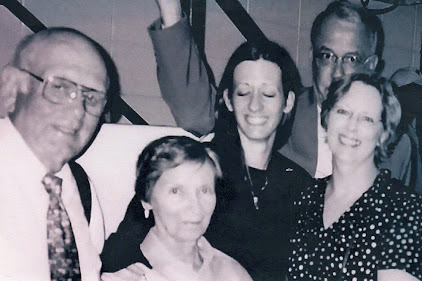 this is the one debo is thinking of: 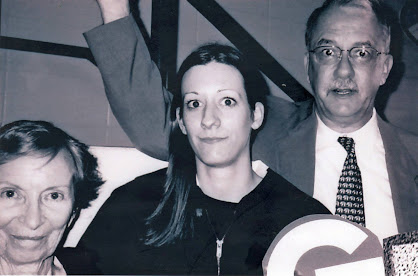 it was an awkward moment. the three of us seem to know it. garebear and i appear similarly alarmed.
so i don't know.
it feels like... i don't know... sliding doors... a rorschach... it can equally be a ridiculously awkward moment with an ex-boyfriend or it can be me making eye contact with the man who'd been abusing me for the last 2 1/2 years.
choose your own adventure.
so much of this feels like that. so arbitrary. like i actually have a choice to maintain the fiction i've been telling myself for years. that this was just a "bad relationship."
it is like lifting the train and moving it from the other track, to go back and see it for what it was. to call the harm what it was. to acknowledge how incredibly fucking scared and helpless and hurt i have been for years.
debo looks beautific in that other picture. proud of my lashes, i lowered my eyes. joe, also, is smiling. but burvil and garebear. they don't even know it, but they sit in judgement. they don't know but they do, right?
pictures are deceiving. pictures lie. but, across the years, i appreciate their seeming unwillingness to tolerate this bullshit.
some day we will talk about something else. some day i will write about something else.
i like control. i am fine to tell the story when it is mine to tell.
what i resent is the moments, as was the case at the dentist, when it is still mine but i have no choice and i have to tell it. when i have to tell it and then open wide and lay there and take it just as i lay there and took it again and again and again and again for all of those years.
what i resent is that, let's be real: odds are pretty high both of these men's lives are largely unaffected by what they did to me. yeah, sure, maybe it occurs to them every now and then that they didn't behave great, maybe occasionally they remember and they are ashamed, but i bet you a million bucks neither of these dudes are rocking up to the dentist and saying they raped someone. neither of these men have tears rolling down their cheeks as they're told to open wider so their gums can be critiqued.
and that, my friends, is fucking unfair.
by oline

Email ThisBlogThis!Share to TwitterShare to FacebookShare to Pinterest
filed under: oline in college, rape in the city