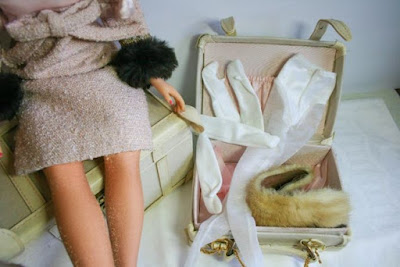 i was house-sitting for my nephew's parents for a few days while they were away on work. it was just four days. a staycation in which i finally had an opportunity to do allllllllll the laundry i've not done (a not new circumstance) in the time that has elapsed since december 9th. because i'm living in a building with no laundry facilities and, though i've found a modicum of stability, i really cannot handle another new place and psychologically navigate the launderette that is .75 miles away right now.

apparently, due to a shaky laundry situation over the summer, i've inadvertently accumulated enough underwear to get by for 1.5 months. which is a victory perhaps best characterized as troubling. but there we are.

this process is a weird time capsule now. the packing of the suitcase and the occupation of other people's homes. weird enough that i'm wondering if trying to doing a house-sit in paris over the summer wouldn't actually just be profoundly triggering and destabilizing at this point.

i've been in this particular home two other times.

the first, in august, when i'd just decided to try this nonsense thing and move to DC with one quarter of a job and house-sit my way through a semester.

then again in october, right in the middle of the month of seven moves and around the point that it was becoming clear how entirely unsustainable house-sitting would be for much longer were i to remain human.

i'd forgotten that actually, until the other day. that when all of this started, when i hatched this idea at the house with the black dog and then i took the job at the first university, it was with the idea of seeing what it was like. when i pitched this to my parents, in the house with the two black cats, i said, i'll just try it for a semester and we'll see. i did not look beyond that. i did not allow myself to imagine further.

and here we are now. with four jobs, a home, a couch and bookshelves, FLATWARE OF MY OWN CHOOSING. safe to say i am properly entrenched. this is where i am. now and for the foreseeable future. yeah, the foreseeable future still exists in terms of, like, a week rather than months or semesters or years, but it's progress of a sort.

i'm slowly eking my way through disturbance-- eking because it is horribly beautiful and it has entirely more typos than should be allowed but also because i want it to last-- and there was a short passage about the writer's ex-wife. lançon writes of her:


From her former condition as an immigrant, she had retained this quality: she settled in without difficulty, and immediately, wherever she was, as if she had carried her house on her back and her valise-- big, cheap, held together by straps-- between her hands. as if at any moment she was going to have to leave.

i was an incredibly privileged immigrant, to be sure. but it still feels, on some level, over two years after i had to leave, that at any moment i will have to do so again.

something in him never stops trembling.

i know one other person who shares this experience. we met when i was in between the house with the black dog and the house with the black cats, hauling all my bags around town. over coffee, with all of my bags (i had so many bags! i felt i had to account to him for all of my bags....), i confessed i had this wild idea of house-sitting my way through a semester and he reeled back in horror.

he'd not yet had to leave and the lack of stability in the plan i proposed horrified him to no end. he could not imagine it. the discombobulation, the total lack of connection, the transience.

he reeled back, and i said some weird thing, something, i think, about how once it's happened, though, you don't really expect much. (even then, even over just coffee on a first date, i was aware of this line between us-- what had happened to me had not yet happened to him and though i assumed it would happen to him, because i knew it could happen because it had happened to me, he did not know that and so our lives together and our time together depended upon my playing along... to be happy, i had to suspend disbelief, had to fully, completely, lean into the sheer loveliness of his arm around my waist for all those friday nights and pretend i did not know the ending, though i did know it, because i know these things do happen, these things can happen and the world is unfair, life is unkind. think of that-- you who have not experienced this, you who are reading this and have no fucking clue-- think of trying to forge a connection with someone for whom you care, trying to be vulnerable with that person across all of the pain and all of the past and this visa reliant pit of doom. please never accuse me of insufficient bravery, my love. do not.)

once you've had to leave, once your hand is forced and your heart has had to break, there's nothing there so you build from that nothing, and it's ok and you get through. some of that neoliberal, capitalistic bullshit, i fed him that, i think. (this person to whom i'm not currently speaking and yet whom i hold terribly dear.)

and i remember i said something about how i didn't think i could have done this before, but now it seemed a reasonable option. this had not yet happened to him then, so he did not yet know. (it has now happened to him, and i do not yet know where that leaves us, us both having been broken by the different countries where we lived and loved.)

on my way home from that date, i got an email that i'd gotten the job at the first university. and the plan that had so horrified him had suddenly come to be.

this fear of having to leave isn't an entirely new thing though. i'm aware i felt it in the first year i lived in london as well. i remember discussing it in therapy, the sensation that i'd become somehow detached from whatever solid life i'd been leading in chicago, and all of a sudden things were tenuous, the status of being a student, i imagined, was judged less valuable to society, and therefore, more easily revoked than, say, having some god-awful day job that gave you little in the way of pay but health insurance enough to keep you alive.

there are, however, two elements of this sensation that are particular to this specific instance and they are intriguing to me now:

(1) the reality that nearly all of my memories from 20 june to 9 december now prompt the immediate internal question of which house i was living in at the time of their occurrence.

and (2) the fact that given that sensation of feeling one may at any moment have to leave, for six months this summer and fall, i chose a lifestyle that meant i repeatedly, excessively, had to do just that: i had to leave, all over town, again and again.

i did so because this is what it felt like it took to feel free, which, to me, for whatever reason, meant to be here, in DC, in the capital of my country. but also how fucking weird is that?! this seasonal enactment of my worst case scenario, over and over again, like sisyphus, packing my bags, hauling the suitcase, saying goodbye to the cat, and shutting the door.
by oline

Email ThisBlogThis!Share to TwitterShare to FacebookShare to Pinterest
filed under: D, getting by in the city, immigration in the city