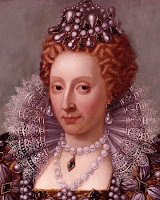 yesterday-- for day 1, part 2 of the spring semester-- i wore a ruffled blouse which i've carted to london and back and yet somehow not worn since december 2012. apparently, the combo of (1) teaching at a women's college (2) in the afternoon, has emboldened me to go bigger than before (which, let's face it, was already pretty big), so i elizabeathened it up by pairing it with a capacious cardigan that made the ruffled neck stand up.

elizabeathenry is a teaching mode i've not previously explored and one to which i'm not entirely likely to return to as, mid-way through class 1 of 2, it became evident i'd probably not worn this blouse since december 2012 because its buttons do not hold.

mercifully, equally afeared of this top's transparency and freezing in the bookshop last night, i'd worn a black shirt beneath it, so the fact that i was busting my buttons wasn't nearly so jeopardizing as it could have been.

however, there was, in the midst of teaching, a lovely moment brought to us by this blouse.

early in my second class, in concluding my introduction of myself, i asked of them: do you have any questions about me?

i anticipated questions about london or celebrity or melania trump.

i was entirely unprepared when someone immediately raised their hand and asked: where did you get that top?

Email ThisBlogThis!Share to TwitterShare to FacebookShare to Pinterest
filed under: it's fashion, teaching in the city