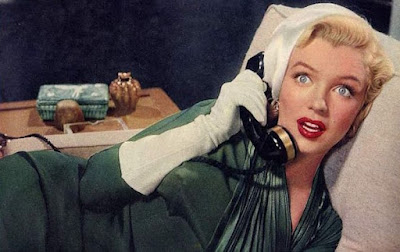 for the last month, i've been receiving calls from someone associated with my phone carrier trying to sell me a phone i do not need. finally, today, in the midst of trying to write three applications, i took the call in the hopes of making them go away.

given their persistence in not reaching me, i should've seen this was a bad idea.

first, i couldn't remember my "memorable place" or my "memorable name" to verify the account. then, when "paris" wasn't my memorable place and all of the prompts seem to involve the word "memorable," i wondered if this wasn't a scam. (it wasn't, but my phone carrier sure as hell needs to work on appearing legit.)

when the guy asked for my bank account to verify my identity, i was nearly certain this was a scam, a sensation only heightened by the fact that the text attesting to the authenticity of our call had not arrived. he was shocked! astounded! how could the text not have arrived?!

finally, three minutes into an exchange that had already gone on for three minutes too long, the guy asked, is there anyone else in your family on a pay-as-you-go contract?

there is no one else in my family. i have no family, i replied, passive-aggressively being impolite by implying everyone around me who might own a phone has died. (little do they know we are on contract with sprint until The End of Time.)

so you live alone? this man from my phone company asked.

and before i could conclude that telling a stranger that i live alone maybe wasn't the wisest move (it seems equally possible that either my identity has been stolen or i will be murdered it in the night), i said, adamantly, with great defiance, YES, i live alone.

and there's one universe in which this is a compliment. where i am, in fact, a brave woman for having both the liberty and the choice to live alone.

but that is not the universe in which i live.

because hearing him say this, actually- hearing him repeat it (because it was somewhere in the repetition that it slid from being a compliment into being a joke)- i felt diminished.

Email ThisBlogThis!Share to TwitterShare to FacebookShare to Pinterest
filed under: feminism in the city, sexism in the everyday