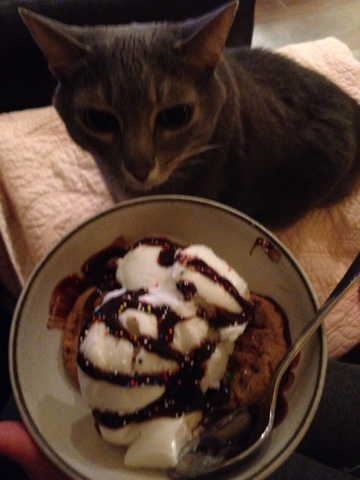 this is what debo's calling it now when she calls with the latest installment. it's a soap opera with near-daily updates.

last night, my parents had spaghetti for dinner and wanted to finish a film before doing the dishes. in the midst of this, the cat leveraged a wooden spoon to upturn the lid on the pot containing the spaghetti sauce.

my parents dismissed this racket as "the house settling" but, when garebear later went into the kitchen, he found the cat with half his body extended into the sauce.

for months, it has been a point of pride with garebear that, though he cut fez's food allotment, the cat had not complained. turns out, there's a reason for that: the cat is a wily minx.

fez has been eating the dog food, garebear tells me, a note of resignation in his voice. not just eating it, but opening the bag.

my parents have developed a theory that when he was abandoned, it must have been in a room with nothing but a sealed bag of dog food. a bag he taught himself to open and feast upon. hence his uncanny ability to infiltrate sealed containers and order up a buffet.

his greatest feat yet came on thanksgiving.

my parents were lying in bed and glimpsed a strange shape sauntering through the hallway. a sight which would suggest the cat had leapt upon the kitchen counter and grabbed a sealed bag of leftover thanksgiving dinner rolls, which he proceeded to carry up the stairs and through the hallway as he held it in his mouth.

my parents confiscated them. but twenty minutes later he was back, casually, cooly walking the halls with the empty bag the rolls had come in.

clearly, the cat has won.
by oline

Email ThisBlogThis!Share to TwitterShare to FacebookShare to Pinterest
filed under: fezzik, the family forward