since 26 june, i have been texting k.lo links to articles on the blossoming love of tom hiddleston and taylor swift.

and since i began doing this, i've given it little to no critical thought.

because this is the friendship k.lo and i have cultivated in the last ten years. 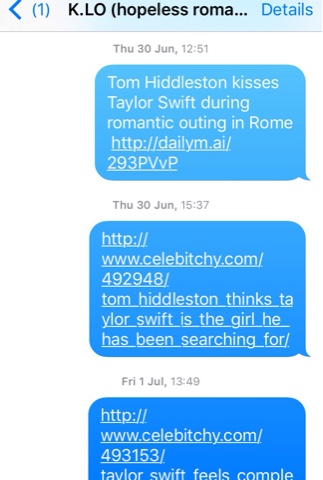 it is a testament to the trust involved in that friendship that i expected no reply. that i interpreted the lack of reply as permission to continue sending these links, and that, receiving no reply, i continued to do so.

i also, i realize now, took for granted that she was reading every single one.

i now know i assumed this because, in our conversation- in a moment heralded by a pause and a declaration of OHMYGOD K.LO, my peppering you with links on the quotidian details of these people's lives is about to enable me to say what i'm about to say- i told k.lo, you could really see it in those photos from when they had the italian dinner on sunday night. 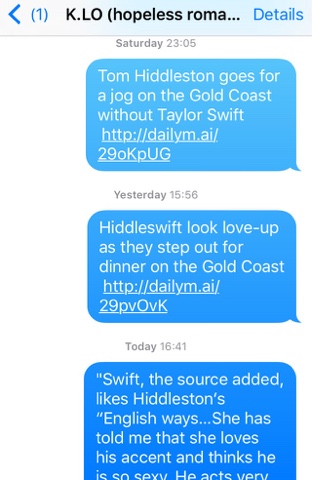 the ritual goes like this... (1) click on the link to an article about hiddleswift, (2) text the link to k.lo, (3) screenshot the ridiculous headline for the blog post i imagine i will write about this all later when i finally have the time/energy to historicize it alongside The Summer of TomKat, and finally, (4) laugh/read thru the article.

when i tell her about my process, k.lo is dazzled to find that i send the articles to her before reading them.

her dazzlement forces me to think critically about this behavior for the first time all month. and it begs the question of how much of my interest in the unfolding saga of hiddleswift is about her involvement in it with me. the fact that the link goes to her first.

before i have read the story, already she is a part of it too. i have implicated her.

i'm trying to think of a historical parallel for what this is. gossip, obviously. but gossip is never just gossip.

i rather wonder if, much as k.lo's control of my love life last winter (TRANCE MUSIC IS THE SALT AND PEPPER OF MY LIFE!!) made us communicate more frequently and regularly than we had in years, the ongoing saga of hiddleswift is providing a similar touchstone.

except this is waaaaaaay more passive. the gossip equivalent of "hi."

it's not like we're discoursing at length about hiddleswift. i am forwarding links. she is reading them. once a fortnight or so, if there's time after we've caught up on each other's lives, we'll pivot to hiddleswift and evoke some obscure detail from their going out to dinner on sunday night.

i've clearly not been bombarding her with links for a month specifically to have a conversation about hiddleswift's italian meal. but it is a building up of shared knowledge over time. it's using gossip to stay in touch, to create a shared experience with someone i've not seen in two and a half years. and it's a way of signaling to k.lo that she is on my mind. (though maybe she wishes less so.)

just after moving to london, i attended a lecture about people in the english colonies and how, after leaving their families and moving far away, they were desperate for the arrival of the mails. and the disconnect between their enthusiasm and longing for news, and the casualness of the responses their letters received from back home. WRITE SOON! they wrote. repeatedly. and months later, a reply- always lamentably brief- would arrive.

when you are away, there is this tug from afar. you are not there, you maybe don't even want to be, but the tug persists nonetheless and there's this impulse to reach out, to make contact, to touch. this is why, when my mum comes to london, she is obsessed with taking pictures on my father's behalf and talking to everyone back home. she feels far away. in being here, she is reminded that she is not there and so she repeatedly makes contact in an effort to lessen the discomfiture of that.

that discomfiture does not entirely go away when one moves abroad. at least it hasn't for me. it lessens, but lingers. one feels simultaneously at home and also liminal. neither here nor there.

and i do wonder if that's what this is.

when i wake up in the morning, america is asleep. inundating k.lo with early-morning texts about hiddleswift is perhaps a way of subduing that early morning loneliness.

or... perhaps that's bunk and i'm just a gossipy bitch, determined to drag her down with me.
by oline

Email ThisBlogThis!Share to TwitterShare to FacebookShare to Pinterest
filed under: gossip and girls, k.lo