i remember liking, at the time, the symmetry (the serendipity?) of leaving for london on burvil's birthday and landing on epiphany. it was, after all, burvil who said go. and going felt like a form of epiphany.

i spent a week with her down on the farm at christmas and, while it wasn't exactly like old times- precisely because we are all older- it felt like a luxury. an extravagant one at that.

to be the beloved grandchild. to blow into town and have burvil call up all her octogenerian widow friends who no longer dare get behind the wheel and hear her boast to them that she has a driver who can take the whole lot of them up to walmart.

in 1986, in her '86 buick with the cutting edge of technology power locks and power windows, burvil had rescued me from the hell on earth that was the harding academy summer camp. she let's me drive it now and flinches only ever so slightly when i, upon first getting in, confirm with her that i know the gas from the brake.

when leaving, i hugged her extra long, because in all the years that, in leaving her, i've not known if i'd see her again, this time felt somehow extra. the risk seems greater now. the impending loss edges closer.

i write a lot about death because i write about life, and death is fundamental to life because we spend pretty much our whole lives trying not to die. and yet it is inevitable. it is coming.

in related HILARITIES... look at THIS right now. let me draw your eye to this line: "my aim is to write a book without a death." please know that what i have written is a book PERVADED by death! having only read online commentaries, it is like what i imagine game of thrones to be like. for real.

oh young, naive, innocent oline of december 2014, no: you did not know where you were going.

against the wishes of burvil and debo and amid much family furor (a situation probably not helped by my repeated assertions that we're all going to die and it's better to be actually living our lives when we do), i went to paris a few days after the violence there last november. burvil has never acknowledged that i did this, but there was a lot of talk over the kitchen table about how violent the world is and how it will all be better when i come back to america and come live with her.

because my moving to mantachie, mississippi is going to solve the problems of the world.

it feels right now like a lot of things are coming, though i know not what, which is as it always is and should be. we never know where we're going. we only like to think we do.

three years ago, i blew up my chicago life and moved to london knowing that, three years later, i'd wind up with a series of crises that only luck and hard work and god would be able to fix. et voilà.

and some days i feel zen about that while others i am a one-woman circus, and that's ok.

in my perfect world, we would all be together in a candlelit room somewhere and begin the year with a reading of adam gopnik's "two ships." in lieu of that, i give you this: 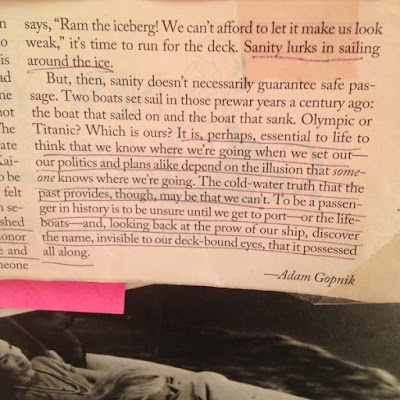 Email ThisBlogThis!Share to TwitterShare to FacebookShare to Pinterest
filed under: burvil, the family forward, the natural condition, things that happen when you just say YES