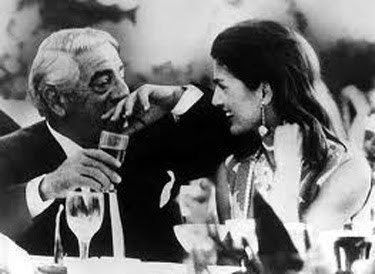 jackie and i've been together for 18 years. since the badly xeroxed women's history handout in mrs. pavlick's 6th grade english class.

18 years and i never once thought to ask "why jackie?" now, i can't stop wondering.

because i have no answer. i've had 18 years, a book and two big projects to come up with one and i've got nothing.

well, that isn't entirely true. i've staked 3/4s of everything i've ever written on the theory that she is the twentieth century's archetypal female, a tabula rosa onto which, even after her death, we can still project our own experiences to find meaning.

but that's the pretentious, academic answer. i was only twelve when i met her. back then, i would've mispronounced tabula rosa as tabitha rose and mistakenly believed the concept to be a transfer student of european descent.

if we examine the fact that what i remember most about that handout through which i met her is that it was badly xeroxed, we might conclude that i wasn't so much captivated by jackie's story as impressed by the poor quality of the page middle school duplicating equipment.

but there's more to it. the other thing i remember about the women's history handout packet is that jackie was clearly a last minute addition. the pages on florence nightingale, madame curie and sacajawea were all stapled together and bound in a folder. jackie was a separate sheet, as though she were tossed in at the last minute. as though there were a question of whether she really belonged.

in the pyramid of powerful women jackie stood out because the paper on which her story was printed was physically separate from the others, but she seemed set apart in time and space as well.

with their ruffled blouses and bunsen burners, these other women belonged on badly xeroxed handouts, but jackie's feathered bouffant bespoke a modernity uncharacteristic of historical heroines. she was clearly a renegade.

the sketch of her that appeared on that handout was from a period that i would later know to identify as "the onassis years." why jackie? because her earrings were enormous.
by oline