public speaking, much like tennis and figure skating, is something at which i excel in my head. in real life, not so much.

there is nothing i deplore in all the world so much as addressing groups larger than three, because i do not like to confront my inadequacies. i do not like to be reminded that there are a host of things at which i am not simply thoroughly bad, but downright deficient. and there are few things at which i am more deficient than articulate public speech.

in recounting our experience in an ill-fated speech class, in which we merely had to state our names and why we were there, the dane told sensei: as it became increasingly clear that we were going to have to introduce ourselves, i looked over at oline. her head was bowed and at first i thought she was praying, but then i realized she was just trying to disappear.

it's funny then that i've stumbled into this whole sex tobaggon speaking tour, an ordeal for which disappearance is not an option.

my mechanism for psychologically coping with the looming horror of this inevitability was to completely ignore the paper i was going to deliver this past weekend, to forgo all practice of any sort and simply scare the shit out of myself by all other available means. hence the flight lesson, the blood donation, the driver's test, the beef tongue. as though systematically hurtling through the catalog of my fears would render the nightmare of public speaking utterly powerless in the end.

if nothing else, i would be so shell-shocked as to be insentient and the horror of opening my mouth would be somewhat dulled.

i did all of this (except the flight lesson, which is forthcoming), only to find out that what i require to be psychologically capable of public speaking is really quite simple: fuchsia clip-on bangs and thirty minutes reading eichmann in jerusalem while listening to lady gaga's "bad romance." 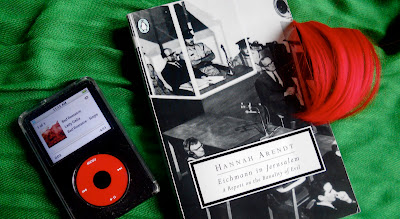