0 it is so deeply weird

to read other people writing about you.

and i say that as someone who spends pretty much all day writing about other people so it probably sounds pretty disingenuous, but it's true.

a website linked to a post i wrote about the phrase "marilyn monroe reading" on finding jackie. the shout-out on that website was unexpected and nice. 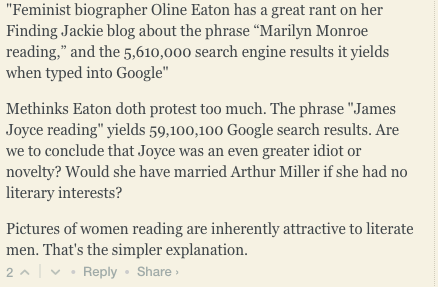 which isn't terrible, but it is weird.

to be called "Eaton" for one. and to have someone i don't know saying i'm protesting too much (which- due to the tone of the comment, the fact that my "rant" is about men's fetishization of a woman's literacy, and the reality that it's a dude writing this comment- feels a bit condescending). in the end, to me anyway, his argument essentially backs up mine, but still. it's easy to forget that, in blogging, you're making arguments, which makes it even weirder when- 8 months after you wrote something- people engage with the argument you forgot you made.
by oline

Email ThisBlogThis!Share to TwitterShare to FacebookShare to Pinterest
filed under: oline elsewhere on the interwebs