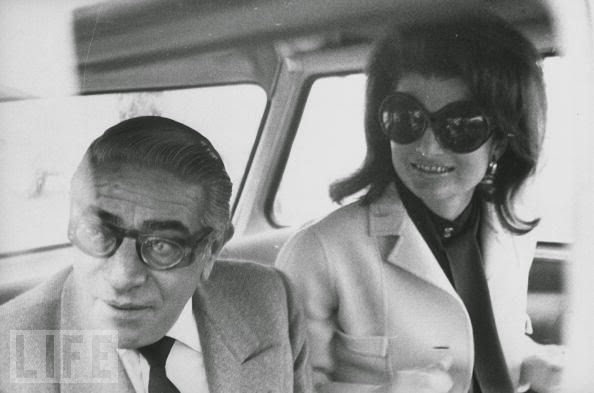 i killed aristotle onassis the other day. like, rolled out of bed and thought- even though it was 4 years removed from where i've been writing- i think i could write that today.

and so six hours of my saturday were putting ari onassis to death.

which sounds sooooooooooooo super macabre. which is something i realized when a friend texted asking if i had fun plans for the weekend and i replied yes and told her what they were. (clearly i'm hanging out with the right people as this friend wished me luck and the friends i had dinner with last night raised glasses of rosé to his memory and chanted earth to earth, ashes to ashes, dust to dust...)

but i'd got a letter the other day from an archive and it provided the guts of this section, the thing around which the whole scene could be written- which is the key that unlocks the door to getting words on the page. and when you get the key, you gotta use it because who knows how long there is before they change the locks.

so onassis is dead. which is funny because i actually need to go back now and write him back to life. (i swear i'm not getting a god complex!)

and funny also because, again, regardless of how well i think i know my writing process, still it goes an does totally wacky things.

because instead of writing actual chapters, now i'm writing scenes. and instead of working beginning to end, it seems now it's coming from either end and will, someday- god willing- meet in 1973(ish).

but it's provocative- how we so often see and read our own lives and the lives of others in terms of lines, whilst the mind so seldom works that way. the line isn't the reality but the organizing principle, how we make sense of the jumble in which we live.
by oline