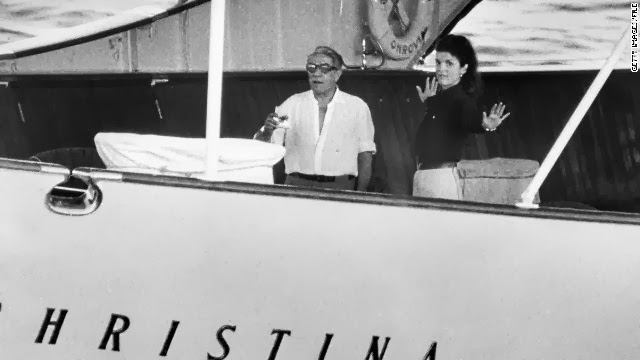 last july, there were a bunch of reports that ari onassis's yacht was up for sale again. upon a little digging, i discovered that- lo and behold!- it is moored about an hour outside of london as it awaits purchase by some bajillionaire.

on a whim, after a comparatively shallow google (shallow when compared to the googles i've been doing to locate oral histories of people in the foreign service regarding jackie's trip to cambodia), i located the contact info for the agent in charge of the sale and asked him if i could see it. he wrote back and said i could the next time he was on ship.

i was actually thinking about this the other day. in that way that you randomly think about things and your having thought about them suddenly takes on great significance later on when they fall together and you look back and think i am a prophet!!! except you know you're not because it's all just random and your job isn't so much to put the pieces together as to keep them moving towards each other so they can some day, when the forces align and the timing is right and everything is in balance, fall in... anyways, i was thinking about how i should email these people because it had been seven months and they couldn't possibly remember me and then, of course, i did absolutely nothing about it.

this is where we are: on thursday, in the midst of another tube strike, i am taking a series of trains to chatham, in the hopes of locating the right docks, rendezvousing with the right people so that i might attain security clearance to enter said docks, and step aboard a boat on which jackie once lived.

i'll admit i feel a little rusty. it's been awhile since i've been about this business of jackie-related adventuring. two and a half whole years since i sat in the room where her mother died.

for a year now, i've spent putting her into words and sentences and paragraphs on a page that is emotionally fraught at best. it's an entirely different feeling, one i'm not even going to begin to justice to here, to take her out into the world. to go out with her into the open. to stare out into the water, into the atlantic, sit in rooms where she was.

writing about her is describing the contents of a kaleidoscope.

being where she was is like drawing the deepest possible breath.

after all that squinting, i can- at last- open my eyes.
by oline