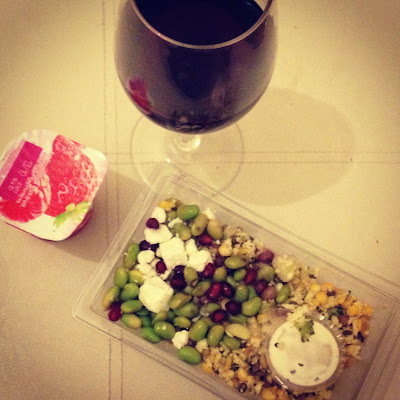 some days i get it right. balance. this is so rare i can't even... but it happens. some days. some nights.

yesterday, for instance, it happened. i did laundry. and went to the store. and watched several episodes of sex and the city in between HOURS of editing and re-writing and researching and re-writing. whole hours mired in jackie and violence and murders of the mid-1960s. hours that, dare i even say it?, felt as minutes. it was that good.

it was exhausting, mind you. but good. in a way it hasn't been in awhile. because things tend to happen in fits and starts. god knows, i'll probably live off this one day of productivity for awhile, using it as an excuse to goof off for weeks.

but there was this one day. and it was good.

and it was followed by a nice square meal of the kind i so seldom have because i'm given to eating the same thing over and over and, when i have my wine, having it with cheerios. and... wait for it... THE PREMIER OF DOWNTON ABBEY SEASON 4!!!!! something, i'll admit i'm far more excited about seeing because i can then lord it over people back in the u.s. than i am about seeing it because i actually want to see it. which, well, my bad. (do not worry. debo has evoked THE CONE OF SILENCE. there won't be any spoilers.)

the lesson to be learned here is, i guess, that maybe writing has to be tempered with liberal quantities of tv...
by oline

Email ThisBlogThis!Share to TwitterShare to FacebookShare to Pinterest
filed under: tv in the UK, writing in the UK

Let's talk about that dreamy food in the picture!

the everything bean salad from marks & spencer. SIGH. you would love. begin putting pomegranate seeds in your salads immediately, my friend.