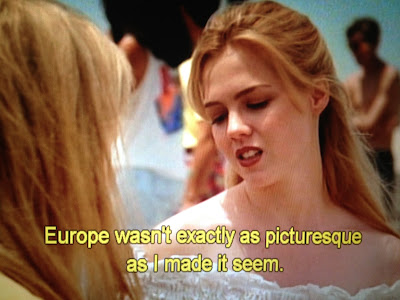 Aaaaaaaaaaaaaaaaaand WE’RE BACK.
are you all like OH NO! I’M NOT READY! WHERE DID SUMMER GO? WHERE AM I GOING TO LIVE WHEN I GET TO CALIFORNIA UNIVERSITY??!?!? if so, fear not! you’re not alone! i mean, you’re in david silver’s boat, which isn’t exactly the boat you should be aiming to be in but at least you are not alone.
so yeah, summer’s almost over. like, in real life and in 90210. sadface.
but, you guys, we’ve got so much goodness coming. because this is the year ahhhhhhndrea becomes a slut (and is PUNISH-ed) and the year that david becomes a druggie (and is PUNISH-ed) and the year that brenda tries to elope (and is PUNISH-ed) and the year that brandon has a secret affair with an Older Woman (and is PUNISH-ed). and i’m pretty sure things happen to dylan and kelly too, i just can’t remember what they are. suffice it to say, ALL ARE PUNISH-ed. justice is doled out all season 4. except for steve, who maybe kinda forces a woman to have sex with him and then is totally redeemed because she’s mentally ill… wtf? but we’ll get there.
for now- PERISH THE THOUGHT- we are not even all at california university because brenda’s still being all ‘i’mma go my own way, ya’ll’ as if.
so today, class, we’re kicking off season 4 with episode uno: ’so long, farewell, auf wiedersehen, goodbye’.
we went from having a lot of senior problems last year to a lot ‘o freshman problems this year. problems to be solved this week: what if there’s totally no housing for you? what if the high school teacher you have a crush on has a fiance? what if you cross paths with a paranoid new yorker? what if your BF broke up with you in europe? what if you’ve made a big bold move and it TOTALLY sucks? all this- AND MORE!- on this week’s episode of problem solved 90210…   END_OF_DOCUMENT_TOKEN_TO_BE_REPLACED
by oline