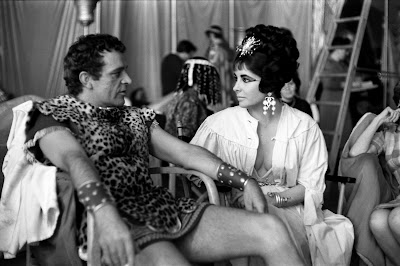 so yesterday- because a restored version of cleopatra was apparently released with NO fanfare and yesterday was the last day of its run in london, both facts i discovered on friday afternoon so there was a great sense of urgency about all of this- i went up to east finchley (a place i didn't even know existed) to see it. because i somehow never had. 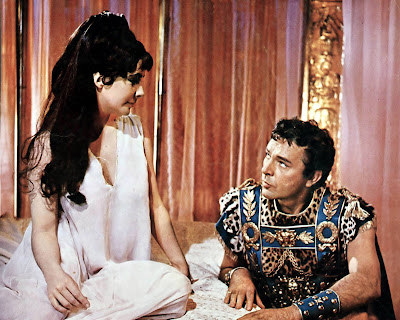 realization #1 upon seeing cleopatra: much as baz lurhmann's gatsby is gatsby 2012, so joe mankiewicz's cleopatra is cleopatra 1962.

i do not think they had shag carpeting in ancient egypt. or, for that matter, polyester.

which isn't to denigrate the movie (because, really, how historically accurate do we expect anything made in hollywood to be?) but, rather, to say that it provides an interesting time capsule of both 60s attitudes towards powerful women and the ancient world whilst simultaneously being a bizzaro harbinger of what we think of when we think of the 60s- fallible leaders, bouffants, eyeliner, poly knit blends.

that said, i can't decide if it's bunk. if the film itself isn't so much a harbinger as that burton/taylor are now so tied up in the decade of the 60s that, looking back at them, it is hard to separate them here from the visual aesthetic of the decade as a whole. there were moments where it looked like burton's in the 1962 movie were pulled from his real life closet of 1971. was the film aesthetically forward or did they, in real life, bleed into the film?

realization #2 upon seeing cleopatra: the star of cleopatra is totally richard burton's legs. 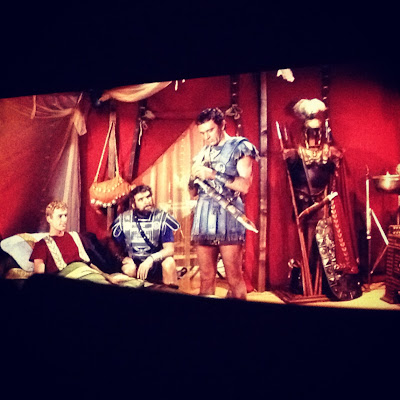 realization #3 upon seeing cleopatra: COULD THIS OUTFIT BE ANYMORE ME??? 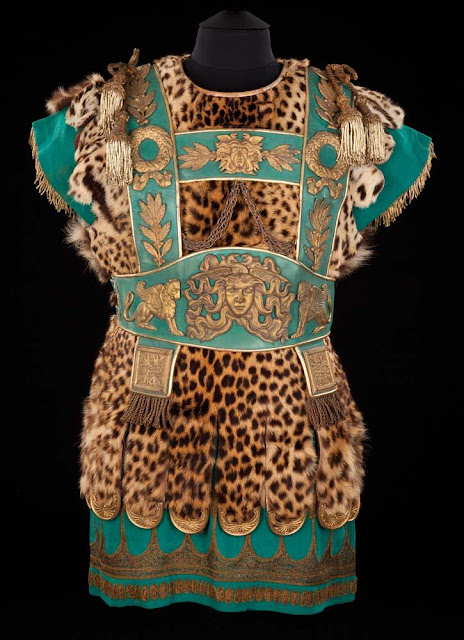 cleopatra has parked her barge beside tarsus and demands marc antony come to her. dude finally relents and what does he wear? THIS. 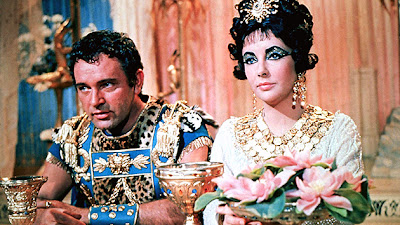 when burton first appeared onscreen wearing this, i giggled. then i realized that this was essentially my ideal figure skating costume. then i further realized that, no, i would just really like to wear this in day-to-day life.

because it has ALL OF THE THINGS, right?! leopard? check. fringe? check. epaulets? check. tassels? check. bold color? check. a vaguely french presence of winged lions and sunheads? check and check.

sadly, i seem to have missed the sale... new life goal: to marry whoever owns it.
by oline

I approve this life goal.

runner-up option: walk a red carpet somewhere and borrow it, like everyone else borrows neil lane diamonds.