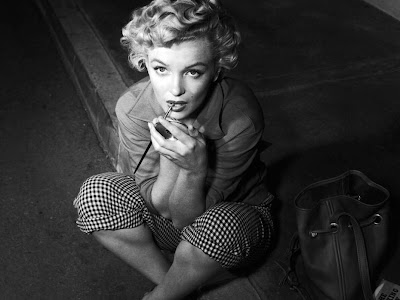 1. merciful heavens, let's marvel at how time has flown since the 20 september 2010 pact.

2. my fifth assignment is a preface, intro, and prologue to the book. i've until the end of august to do it and then supervision in september.

for someone who's been doing this for ten years, i find i'm still astonishingly stupid about process.

for instance, i've been sitting over here reading woolf and fitzgerald and complaining about being blocked then, on a whim, i pick up a shoddy 1978 biography of jackie and it is like i suddenly gain access to a SHOWER OF WORDS. as a fairly self-aware person, shouldn't i know that by now? know that things come much simpler if i'm constantly reading the jackie stories on a loop, like how my dad reads the bible?

for someone who fancies herself a writer, i'm oftimes alarmingly ignorant of how i write. maybe this is typical? maybe we're just always trying to be writers in one way when really the real crux of the writing happens in another?

the problem was, is, and continues to be structure.

how does one put a story together?

the problem was, is, and continues to be that i do not know.

it is not unlike being seven years old and waiting around for christmas.

last night, i did an interview with sarah churchwell and i cannot do justice to the riot in my heart that occurred when she said the structure of careless people didn't come to her until near the end of the process of writing the book. because, reading the book, the structure seems so obvious, so central, so key. it seems so clearly the way the story was meant to unfold.

there's a bit of faith at play here, i think. in the impulse to keep writing, keep pushing forwards towards something, in the belief that it really will all come together. that one is, in fact, beating on towards an end.

being here, doing a phd, it's hard to remember that the whole point is not that i've arrived with this fully formed story i'm meant to spend the next 2-3 years writing down but, rather, that i'm meant to be experimenting. with form, structure, devices, sources, stories, and words. and that a considerable chunk of the words i commit to the page are, in the end, going to fail.

one of the grave misunderstandings of writing is, i think, that books, essays, paragraphs, etc. arrive fully formed, that they are completely conceptualized in the brain and then committed to the page. they don't and aren't. at least not for me. that's not to say that the words don't come or that there aren't moments of stunning inspiration and ease, because there are. but it is, i think, an important element of the writing process to admit that we writers do not always know where we are going, nor should we.

that, if writing is a dark hallway down which we blindly strut, we are meant to be peering into crevices and touching surfaces and pocketing treasures and opening and closing doors along the way.
by oline

Email ThisBlogThis!Share to TwitterShare to FacebookShare to Pinterest
filed under: 20.09.13, biogrophiled, writing in the UK