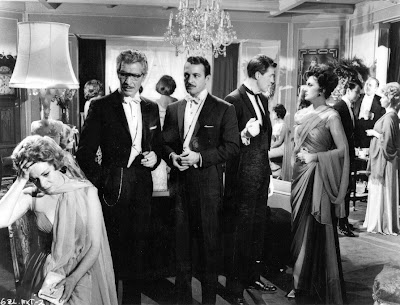 there was this one time where the NLB was super cold and the dane and i kept our coats on our shoulders during writing group, and sensei said we looked like roosevelt and stalin at yalta.

that story didn't really relate to this. i just love to tell it.

k.clen, in visualizing our writing group, once said that she imagined us much like c.s. lewis and j.r.r.r.r.r.r.r.r. tolkein. yes, she realized our subject matter wasn't nearly so lofty (animals! dicks! byzantine end matter! oh my!), but still... we were writers, hunkered down.

this is absolutely, i think, how writers want to be seen and how they want to see themselves. as a part of a long line of others. set apart from those others and radically unique, yes (last night, when asked about jackie's biographers, i repudiated the lot of them for casually accepting the assignment of her life from their editors whilst, in contrast, jackie had picked me... i was THE CHOSEN ONE [this messianic attitude is a new development and, truth be told, i've mixed feelings about it]), but still a part of a lineage.

writing is a solitary practice. even though the fulfillment of that practice is, often, contingent upon being read. we write to be read, non? or, at the very least, to read ourselves.

i've strayed. the point of this is that writing is solitary and yet, as a writer, there is this parallel need to be in community. for me, the writing gets done in the tension between the need to dig in and the compulsion to then reveal the guts i've unearthed.

i think i've strayed again. the point of this, really, is that it is always illuminating to glimpse similarities in other people. little pieces of your own secrets, of the things an earlier you thought were uncool or frivolous and would never've shared with anyone else in a million years.

yesterday, T and i went to a lecture night at one of her friend's flats in east london. people got up and talked about stuff. not stuff that they work with in day-to-day life, for there was a proviso that what you spoke about couldn't have anything to do with what you do. so just stuff. like armadillos and jerusalem artichoke and the inconvenient truths of the meat industry.

i worry i'm not being clear. let me break it down further.

thirty people came together to sit in a room and hear other people talk about random things just because they were interesting.

if only there were a way to reach into the past and lay hands on your younger self and say, there are other people in the world who have irrational loves of odd things. you are not alone.

Email ThisBlogThis!Share to TwitterShare to FacebookShare to Pinterest
filed under: the natural condition, writing in the UK