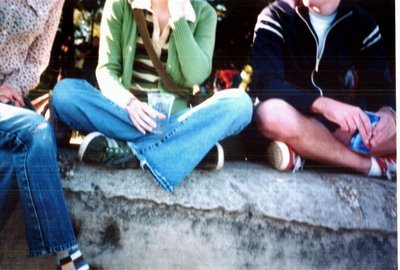 there is a part of me that could, i think, really be a hermit. this part is amplified by the fact that i currently cannot breathe through my nose or speak through my swollen throat, but it's there nonetheless. and i don't mean hermit as in creepy unshaven dirty person surrounded by dusty magazines and empty take-away cartons. i would go to the grocery store and shave my legs. but still. it is sometimes so hard to be out in society. am i right? or is this just me?

in maph (and the TEN YEAR anniversary of our maph year is coming up, so there'll probably be a lot 'o maphinsicing in the coming months), we had this enforced weekly social hour that was, in end, a social experiment intended to increase our endurance of awkward. in which case, DONE. at least for that one year.

every week at social hour we had to stand in a room with increasingly drunk people we didn't know very well, with nothing to do but make small talk and eat hors d'oeuvres that, at the time, i avoided because they were exotic and which i now realize were simply falafel.

because maph was sort of the run-off program for the people who didn't make the cut for PhDs and  the swan song for recent graduates who didn't know what to do with their lives (which combines for an cocktail of disgruntledness, pretentiousness, binge drinking, and primal fear), i always thought the awkwardness of these things was a particularly maph phenomenon. later, i came to see it as more of a university of chicago phenomenon.