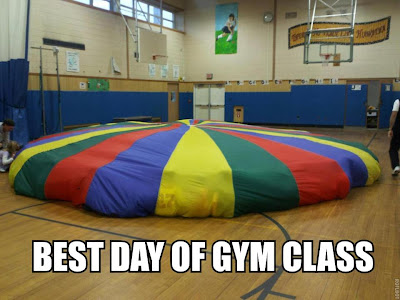 remember middle school gym class? before which, in the locker room, if you were a girl, you’d do that thing girls do where they change their clothes without ever actually standing around in their underwear?

i can't remember precisely how this was done, though i’m pretty sure it’s like riding a bike and would resurface should the need arise.

as for pants, holy smokes! if you were lucky, the final shirt was long enough that it didn't matter if, briefly, you were pantless, but towards the end there, as we grew and our gym clothes didn’t (one shirt/shorts set was supposed to last the entirety of ‘the growth spurt years’ that are 6th, 7th, and 8th grade), there was a lot of extra ab work as we hunched down so our shirts (which now barely covered our bellies) would cover our asses whilst we put on our pants.

so, dudes, if your middle school selves ever wondered what went down in a girls locker room, there you have it. sexy times.

in high school, gym was less of an ordeal. you only had to survive one year and there were shower stalls. in our class, only one kid ever took a shower, but the rest of us undressed in the stalls so there was no more knotting of shirts or pretzeling of arms.

all of that was a lead-in to this: the other day, i changed my clothes in the ladies locker room at the gym. stripped off my dress and put my workout clothes on at my leisure. in full view. UNASHAMED.

only then did i look around and note that all the women around me were fully clothed. only then did i remember that i am in britain (a lovely land that is nonetheless foreign, quirky in its handling of eggs and internet repair and money), and wonder if i’d broken a social code.

as i fretted, a woman came and put her stuff in the locker next to me. i’ve never been so relieved to see a woman pull down her pants.

Email ThisBlogThis!Share to TwitterShare to FacebookShare to Pinterest
filed under: gyming in the UK, oh middle school

and I wonder if british locker rooms have the English equivalent to the "Creepy Naked Man" in all American men's locker rooms.