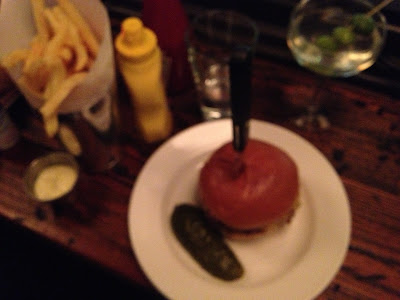 remember last fall when matthew mcconaughey was extreme dieting for that film role? well, way back then he gave this interview wherein he discussed the cheeseburger he was going to have when he stopped dieting and he said this:

“I will have some 70 percent beef, 30 percent fat ground beef, maybe a half pound cheeseburger with another three types of cheese. I’ll prepare it all and I’ll make sure that it takes three hours just to prepare. I’m going to have buns with butter on both sides, toasted and grilled. I’m going to melt the cheese on the top bun, Hellmann’s Real Mayonnaise. I want kosher dill pickles sliced nice and thin, diced white onions, slightly grilled until they get almost hard, and some thin jalapeno slices. And then I’m just going to sit back and let the [expletive] just drop on the ground.”

this whole episode has led to the phrase 'McCooughna-hankering.' a phrase whose meaning might, admittedly, be a little obscured by the fact that we do not know how to spell matthew mcconaughey's name and so usually pull a phonetical jake gyllenhauualall spin on it, but surely you get the idea. it references  those are moments when you need a burger so badly that it is like you have not eaten in weeks.

i've been mccougnhankering for a burger lately and last night i finally got one when c.smartt and i ventured out to portobello road to electric diner, the newly opened london establishment of my favorite chicago restauranteur. a martini, fries, and a burger. it tasted like home.
by oline